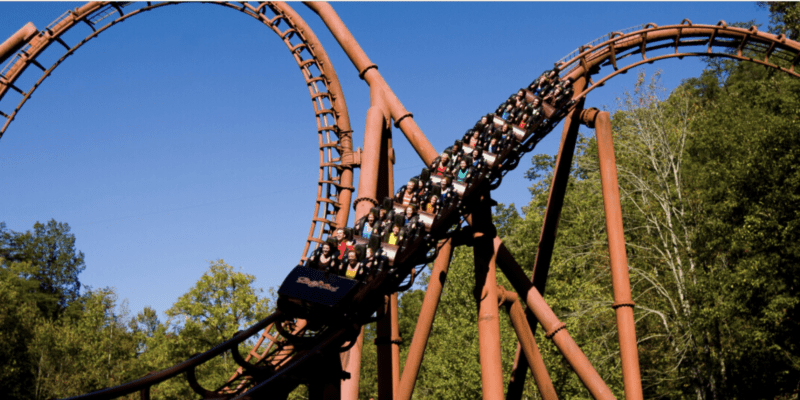 No matter what theme park you attend, rides are subject to malfunctions.

Walt Disney World Resort, Disneyland Resort, Universal Orlando Resort, SeaWorld, Busch Gardens, Cedar Fair, and Six Flags are all subject to ride breakdowns from time to time and many Guests have experienced situations in which they had to be evacuated from an attraction due to a slight malfunction.

TikTok user @morgancscott83 recently shared a video while suspended in the air on a massive theme park roller coaster.

The scariest part was they told us they were letting us off then 10 minutes later, it started up. @jennifer.l.scott1230 #dollywood #fear#rollercoaster

The scariest part was they told us they were letting us off then 10 minutes later, it started up. @jennifer.l.scott1230 #dollywood #fear #rollercoaster

As you can see in the video, the Guests are suspended in the air paused on the portion of the track where they were climbing the hill. The coaster is called the Tennessee Tornado and it’s located at Dollywood in Tennessee, which is owned by the renowned country star Dolly Parton.

The coaster is absolutely massive and the user shares in the video that they were told they would be evacuated after being stuck for a while, but then the coaster started up about 10 minutes later and they finished out the ride.

The Tennessee Tornado is built in the mountains of Tennessee and gives Guests epic views, including a 128-foot drop at speeds nearing 70 mph.

The official description of the Tennessee Tornado can be seen below:

What happens when a mighty twister sweeps through an old Tennessee Mining Company? Locals say the swirling winds twisted ore into what we now call the Tennessee Tornado. A force of nature all its own, this triple spiral-looping coaster makes you feel like you’ve landed inside a funnel cloud as you zoom down a 128-foot drop through an actual mountain at speeds nearing 70 mph. It’s enough to make local weather forecasters issue a “Tennessee Tornado Warning!”

Dollywood also recently closed down its attraction Drop Line out of an abundance of caution following the death of a 14-year-old boy at ICON Park in Orlando when he was released from his seat on the drop tower. While Dollywood’s attraction does not tilt like the Orlando FreeFall in Florida, the tower ride was built by the same manufacturer, and the theme park elected to close it down for an inspection to ensure Guest safety.

The official website for Dollywood describes the Park as follows:

What do you think of this incident at Dollywood? Let us know in the comments.