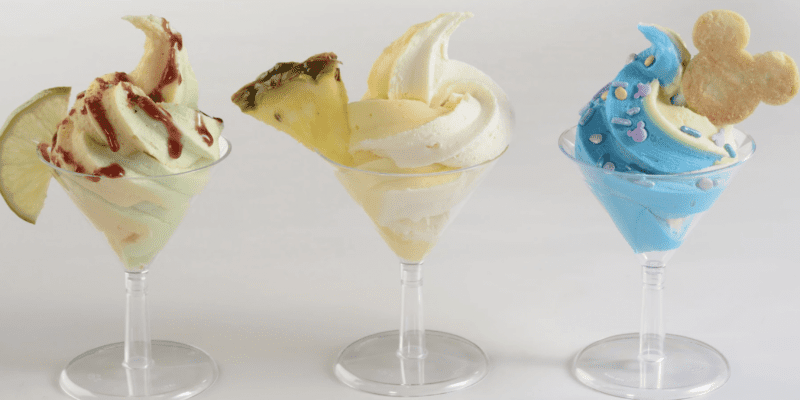 Dole Whip Fanatics… listen up! There is a new DOLE Whip Destination at Walt Disney World Resort! Serving up new DOLE Whip flavors, floats and flights, Swirls on the Water is your newest dessert destination!

The NEW Ultimate DOLE Whip Destination: Swirls On The Water

Head on over to Disney Springs, and get settled in the beautiful Marketplace District. After working up an appetite while shopping for awesome Dress Shop attire, step over to the water’s edge (the bridge to be exact) to visit the newest DOLE Whip stand. Swirls on the Water offers unique DOLE Whip treats like tajin spice DOLE whip nachos, Sangria Float, and more. The surf-inspired kiosk will allow you to, “Indulge in a delightful DOLE Whip® treat as you soak up scenic views of Lake Buena Vista.”

The new  DOLE Whip® Habanero Lime Nachos will set you back $8.99 and consists of mini Waffle Cone Chips topped with DOLE Whip® Lime and Habanero soft serve, Mango Boba Pearls, Spice, Raspberry Sauce, and Whipped Cream. Treat yourself to that while gazing out on the lake!

Those with an adventurous palate will want to order the DOLE Whip® Flight for $6.49. Featuring three unique DOLE Whip flavors, each dollop is topped with tasty treats for flavor galore! The flight includes Lemon and blue Cookie Dough, Pineapple and Vanilla, and Habanero Lime DOLE Whips!

Lastly, we can’t go without a Walt Disney World Resort 50th Celebration item! The 50th Celebration Cone is $5.49. A DOLE Whip® Lemon and Cookie Dough soft-serve swirl is served in a cone with EARidescent sprinkles and a golden Mickey Ear Hat Topper. This is one treat you must try!

The Disney Parks TikTok feed announced the new eatery at Disney Springs with a feature video on March 15, 2022. Regarding the now open quick service stand, the caption reads,

The ultimate DOLE whip destination, Swirls on the Water is open at #DisneySprings 🍍

From the Disney Springs dining website, we hear more about this new Dole Whip Destination.

The taste of the tropics meets the magic of Disney at Swirls on the Water. Discover a full menu of DOLE Whip® items—including cool floats, “soft-surfed” cups and dessert nachos. For the ultimate sweet treat, try the the DOLE Whip® flight, which features a trio of delicious flavors to savor.

Which Dole Whip flavors will you be trying out at Walt Disney World Resort? Leave us a comment below!

Comments Off on Swirls On The Water: The NEW Ultimate DOLE Whip Destination