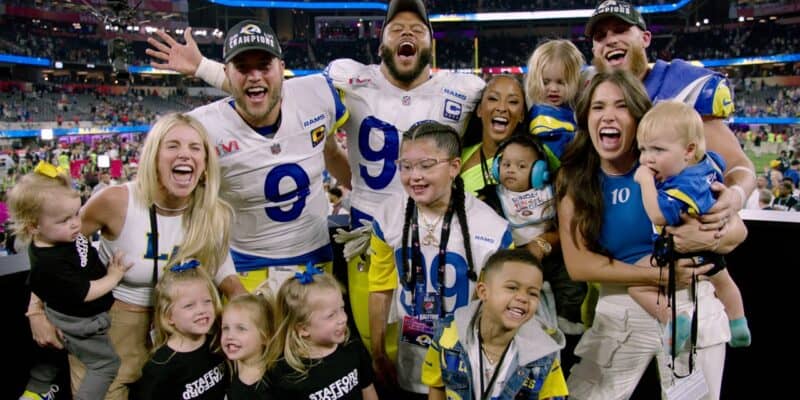 Are you at Disneyland Resort today? You might just catch a glimpse of LA Rams players, (MVP) Cooper Kupp, Aaron Donald, and Matthew Stafford as they play around in the Disneyland Resort Parks after their magical Super Bowl LVI victory.

Winners of The Big Game Headed to Disneyland TODAY!

The Big Game aired last night, Sunday, February 13, 2022 starting at 6:30pm. The intense game (laden with even more fun commercials) ended with a score of Los Angeles Rams 23 to Cincinnati Bengals 20 as the Rams won Super Bowl LVI.  Just after the win, the Rams players were asked that age-old question. “You just won the Super Bowl… what are you going to do next?” Joyously, their answer was that they were ALL going to Disneyland!

While this post-game announcement has been a tradition for decades of Sunday night playoff football, this year marked the first time “three Super Bowl players have appeared in the commercial. You can catch the TV spot airing nationwide this week on major TV networks and social media sites.” The commercial will involve several Make-A-Wish® kids who made a wish to attend the game and cheer on the Rams, including players Kupp, Donald and Stafford.

Since 1980, Disney and Make-A-Wish have granted more than 145,000 life-changing wishes globally for kids with critical illnesses. Merchandise collections such as Wishes Come True Blue have been a part of supporting this critical program for children. 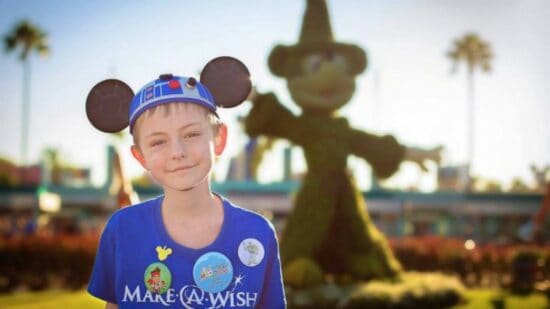 Making true on that post-win announcement, the three Los Angles Rams players will be at Disneyland Resort today, Monday February 14, 2022 celebrating their team’s Super Bowl LVI victory “with a fun-filled day experiencing some of the park’s signature attractions. There will be a celebratory cavalcade down Main Street, U.S.A., in Disneyland park featuring these players at 1:30 p.m. PT.”

If you are not able to be at the Park tomorrow (you would need both a valid admission ticket and a Theme Park reservation) you can still take part in the fun from home. Follow the @DisneyParks TikTok and @DisneyParks Instagram feeds at 1:30 p.m. PST, for a Livestream of the winner’s cavalcade!  The Disney Parks Blog has plans to recap all the fun on Monday afternoon, so check back here for more photos and details.

The Disney Parks Blog strung together some Super Bowl 41 highlights in order to announce the LA Rams’ trip to Disneyland. Players Kupp, Donald, and Stafford begin to celebrate as they lead their team’s Super Bowl LVI victory. Highlighted by “When You Wish Upon a Star,” the video evokes everyone’s favorite post-game line, “You just won the Super Bowl! What are you going to do next?”

Hey, Matthew Stafford, Cooper Kupp, Aaron Donald, you and the Los Angeles Rams, just won the Super Bowl. What are you going to do next? The biggest game of the year has been decided. Now it’s time to celebrate at the Happiest Place on Earth—Disneyland! Learn more – http://di.sn/6003KOCBJ

About Disneyland Resort: “We’re going to Disneyland!” With these simple words your family can visit the Happiest Place on Earth! A place that has all the happy you never knew could exist, so you’re a new kind of happy every time you visit. Here, there are an infinity and beyond number of things to do so you can feel all the endless joy! Discover two enchanting Theme Parks, plus the Downtown Disney District filled with one-of-a-kind shopping, dining, and entertainment. And the best part? You can stay in the magic at one of three Disneyland Resort hotels.

Will you be at Disneyland Park today to see all the festivities? Leave us a comment below!

Comments Off on Winners of The Big Game Headed to Disneyland TODAY!