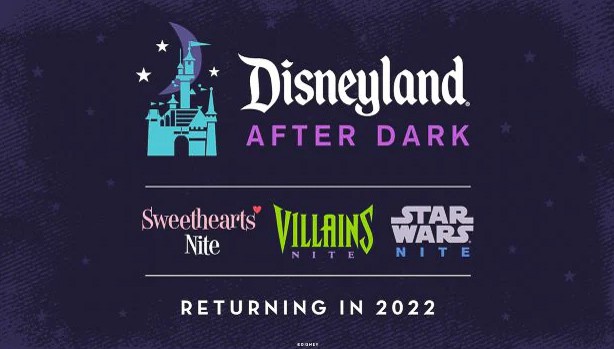 A beloved event makes its way back to Disneyland Resort beginning tonight!

The events were so popular that the Disneyland site crashed when tickets were made available for purchasing and Sweethearts’ Nite, which will kickoff the Disneyland After Dark series beginning tonight and has five dates — February 1, 3, 8, 10 and 14, 2022, at Disneyland Park– has already been sold out for over a month.

While many Guests were not able to purchase tickets for the After Dark event, those who were are in for a special treat.

Today, Disney announced the character encounters and photo opportunities that will be available during the event. Here’s a look at those character experiences and their location, according to the Disneyland Resort app.

Offer and event elements are subject to restrictions, change or cancellation without notice. A valid special event ticket Disneyland After Dark: Sweethearts’ Nite is required.

Celebrate Valentine’s Day at an after-hours bash bursting with heartfelt fun!This February, Disneyland Park will host Disneyland After Dark: Sweethearts’ Nite during 5 separately ticketed evening events. Each event will grant Guests, of all ages, special after-hours park access to dancing, Character experiences, photo opportunities, entertainment, event-themed menu selections, attractions and more.Availability is limited, so hurry and choose from 5 exciting nights—February 1, 3, 8, 10 and 14, 2022. It’s the perfect way to show your sweethearts how special they are in true Disney fashion!

While at Disneyland Park, you can experience many iconic attractions like Haunted Mansion, Star Wars: Rise of the Resistance, “it’s a small world,” Pirates of the Caribbean, Space Mountain, and many others.

Will you be attending any of the Disneyland After Dark events this year? Let us know in the comments below!