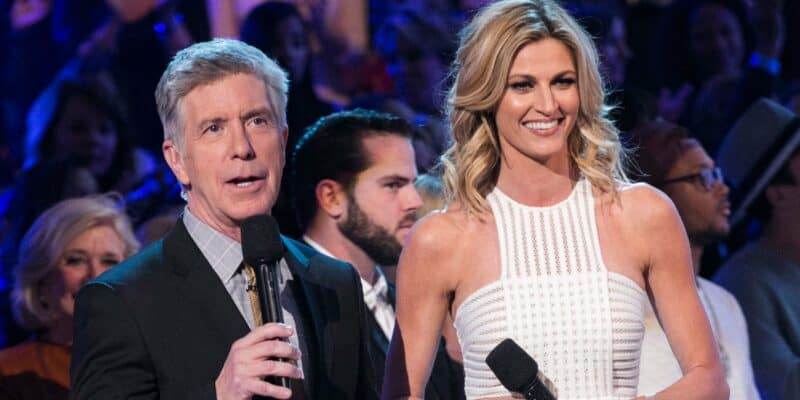 In 2020, fans of Dancing With the Stars were shocked when they learned the show decided to part ways with beloved hosts Tom Bergeron and Erin Andrews. The ABC show decided to go in a different direction and hired supermodel Tyra Banks as the new host of the reality competition show.

Months after Erin Andrews learned the news, she spoke out on the show‘s decision and how it was probably for the best.

Related: ‘Dancing With the Stars’ Competitor Left at ER with “Excruciating Pain” After Disney Week

In November 2021, one year after the news broke, Erin Andrews sat down with US Weekly to talk about her new apparel collaboration with the NHL, which is when she spoke out about Dancing With the Stars.

“I give my best to them. My schedule has been so crazy with [football commentating], the clothing line, the podcasts … trying to have a baby, that I think it was the best thing for me. They wanted to go a different direction, and they’re doing that now. So, hopefully they’re happy.”

Related: ‘Dancing With the Stars’ Cast Visits Disneyland Ahead of Disney Night

The Fox NFL reporter told Us Weekly that she no longer watches Dancing With the Stars, but she is still close friends with Bergeron:

“Tom and I will always be attached to the hip and super, super close as well. I love him so much. He’s one of the best, very fun [people] to have a couple of cocktails with — kind of an afternoon situation.”

Andrews is currently busy with other work, including in the sports industry. She is a longtime sideline reporter and sports reporter and has been with FOX since 2012.

Dancing With the Stars is expected to return for a 31st season, which would likely premiere sometime in September 2022. It is suspected Tyra Banks will return as host.

Were you upset when Dancing With the Stars didn’t rehire Tom Bergeron or Erin Andrews? Do you like Tyra Banks becoming the new host? Let us know in the comments below.