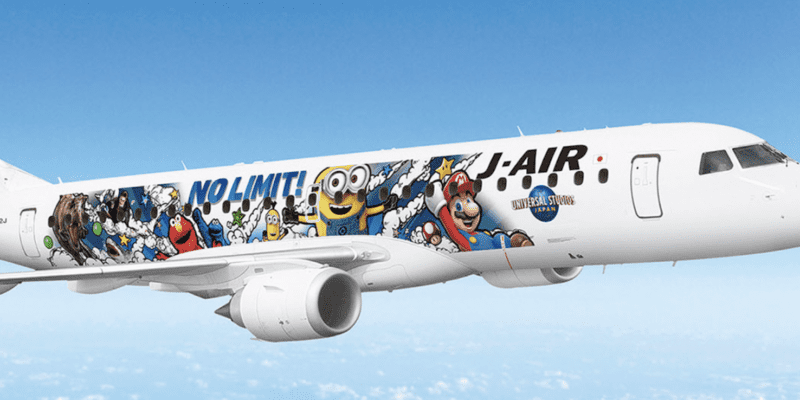 If you are planning on visiting Universal Studios Japan in the near future, you can do it in style.

Now, Universal Studios Japan seems to be doing the same thing. The theme park has teamed up with Japan Airlines (JAL) to bring a fun Universal-filled wrap to some of their planes. The wrap will last until March 2023, bringing Guests Universal joy and IP for a whole year! On the wrap, we can see characters that are featured at the Park like Harry Potter, the Minions, Super Mario for Nintendo World, and Sesame Street characters like Elmo and Cookie Monster.

But, the fun doesn’t end there. On the plane, Guests will receive special commemorative cups for their beverages, stickers, and a special gift with one of the Universal Japan IPs on it.

* The provision of specially designed paper cups will end as soon as they are sold out.

Specially designed seat covers are available!
Headrest covers with special designs are installed on all seats.

We will welcome customers with the entire cabin of Universal Studios Japan.

Enjoy the day to see which of the 6 designs will be used.

All of the fun will debut on February 1, and Guests flying with JAL can check to see if their flight will have these added features here.

Unfortunately, it seems that this amazing partnership will not be coming to Orlando’s Universal Orlando Resort or Universal Studios Hollywood.

That being said, Guests can still enjoy attractions such as Rip Ride Rockit, MEN IN BLACK Alien Attack, Transformers: The Ride, and more. Visit Diagon Alley in the Wizarding World of Harry Potter, where you can venture into Gringotts at Universal Orlando Resort!  Islands of Adventure has some fantastic attractions like the new Jurassic World VelociCoaster, Jurassic Park River Adventure, The Incredible Hulk Coaster, Doctor Doom’s Fearfall, The Amazing Adventures of Spider-Man, and more! Volcano Bay is also open for those who want to get their splash on, and at the moment, Epic Universe is under construction with a potential 2025 opening date.

What do you think of this new plane wrap? Let us know in the comments below!