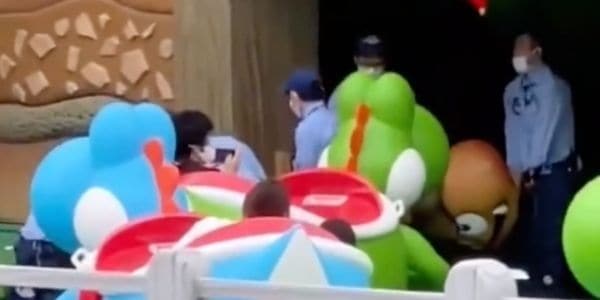 Maybe they ran out of extra lives?

The Universal Studios Parks, both domestic and international, offer so many amazing and immersive experiences to the millions of Guests who visit each year. From the thrilling Revenge of the Mummy: The Ride to the brand new Jurassic World VelociCoaster based on the Chris Pratt-lead Jurassic World film franchise, Guests are always in for an exciting experience. One of the newest additions to the Universal Studios Parks however is centered more on a tamer franchise and is fun for the whole family.

Super Nintendo World is the newest expansion to Universal Studios Japan and is a jaw-dropping display of incredibly themed experiences, rides, and food. The land is a real treat for fans of the Super Mario franchise, offering rides and mini-games for Guests to play. The land also features walk-around characters who will be instantly recognizable to fans of the games. Recently, though, a Guest captured a very stranger event taking place regarding one of Mario’s most famous enemies.

In the hilarious TikTok posted by Issac (@irc6730), the Guest witnessed the Goomba animatronics being “lifelessly” carried away from Guests, quite an odd thing to see while at Super Nintendo World. See the video below:

It is unsure why exactly these Goomba animatronics were being carried away but it made for quite an odd and funny TikTok! For Guests who haven’t been able to travel across the globe to visit Super Nintendo World yet, the construction of the land at Universal Studios Hollywood is still going strong.

Team up with friends to battle rivals and power up. We are born to play! Immerse yourself with thrills the whole family can enjoy at SUPER NINTENDO WORLD™. Let loose in this incredible land of play. Join the #WeAreMario movement. Let’s-a-go!

Race your way to victory! Iconic Mario Kart courses have been brought to life with cutting-edge technology.
Challenge enemies with shells! Aim for the finish line with Mario and Peach!
The world’s first interactive Mario Kart theme park ride will leave you with a rush of adrenaline!

*Based on in-house research of facilities featuring the world of Mario Kart, theme park original attractions and the games.

Go on a journey with Yoshi

Have you been able to visit Super Nintendo World in Universal Studios Japan? Who is your favorite Super Mario Character

Comments Off on Guest Claims Goomba “Died” at Universal Park