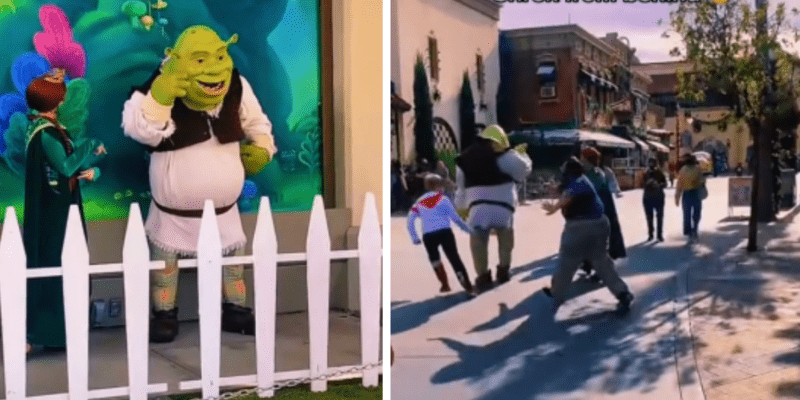 Universal Studios Hollywood has something for everyone to enjoy.

Guests visiting Universal Studios Hollywood have the opportunity to take in many thrilling attractions like Despicable Me Minion Mayhem, DreamWorks Theatre Featuring Kung Fu Panda, Fast & Furious Supercharged, Harry Potter and the Forbidden Journey, Jurassic World The Ride, King Kong 360 3-D, Revenge of the Mummy, The Secret Life of Pets: Off the Leash, The Simpsons Ride, The World Famous Studio Tour, Transformers: The Ride 3D, and many more.

As the theme park has continued its phased reopening, we have also begun to see more character meet and greets and special encounters occur.

One of the most popular character encounters? Meeting with Shrek, Fiona, and Donkey from the Shrek franchise.

A video from @johnnymetro77 recently showed a Universal Guest up from behind to hit Shrek on the backside.

As you can see in the video, the young Guest runs up behind Shrek and as a Universal Team Member jumps in to protect Shrek, he moves away. While there doesn’t seem to be any ill intent, touching the characters is off-limits and these kinds of situations, while they may not seem like it on the surface, can be very dangerous for the actors and Guests.

In the end, everyone handled the situation just fine and the Universal Team Member did an excellent job of protecting Shrek and Fiona while de-escalating the scene.

Per LA County’s Public Health order, all persons ages 5+ must be prepared to show proof of full FDA or WHO approved COVID-19 vaccination (a full 14 days after final dose was administered), or a negative test taken within 24 hours (antigen i.e., “rapid” test) or 48 hours (PCR test) of visit, prior to entry to the theme park. A COVID-19 self-test, sometimes referred to as a “home test”, is not acceptable. Persons ages 18+ must also show photo ID. Verification will take place when required based on theme park attendance. To assist, a third-party COVID-19 testing site is available and offering rapid tests on our property. Children under the age of 5 are not required to show proof of vaccination or a negative test result. Regardless of vaccination status, face coverings are required to be worn at all times, both indoors and outdoors, when visiting the theme park. At Universal CityWalk, face coverings are required to be worn indoors.

Always remember that characters should never be touched inappropriately and that all Team Members should continue to be treated with respect. Failure to do so could have you removed from the Park.

Speaking of Shrek, over at Universal Orlando Resort in Universal Studios Florida, Shrek 4-D was just recently shut down permanently. Now, both Parks only have character encounters with Shrek, Donkey, and Gingy appearing in the preshow of the DreamWorks Theatre at Universal Studios Hollywood.

What do you think of this encounter? Let us know in the comments.

Comments Off on Universal Guest Shockingly Hits Shrek From Behind