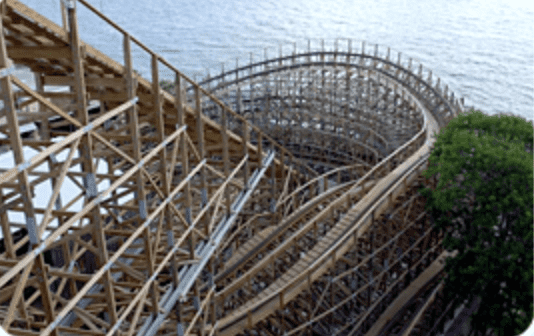 But, last week, it was noted that a worker fell from the Boardwalk Bullet coaster. ABC 13 News reported the injury. It seems a maintenance worker in his late 50’s was around 50 feet up on the coaster, working on the tracks. The worker ended up falling to a platform below and now remains in critical condition, according to the reports provided.

Luckily, ABC noted, “Kemah Volunteer Fire Department and Seabrook Fire Department crews were able to stabilize the man and lower him to the ground level.” It seems that the worker was wearing a harness; however, it was unclear as to if it was fastened correctly. The wooden coaster is owned and operated by Tillman Fertitta’s company Landry’s, and is beloved by many. At the moment, the Boardwalk Bullet is continuing its maintenance and remains closed.

The Boardwalk Bullet is a 96-foot tall wooden coaster with a 92-foot vertical drop. Being a wooden coaster, the dop is very impressive, and reminds us of the soon to debut wooden/steel mix coaster, Iron Gwazi at Busch Gardens. The ride hits 51 miles per hour and provides rider with 3.5x G-force. Taking on 800 passengers per hour, the coaster is only 5 feet away from the water’s edge of Galveston Bay and spans over 3,000 feet.

Texas is home to a ton of theme parks, so Guests visiting the area who would love to experience a thrill have a lot of options. Below is a list of some of the locations you can visit on your next trip:

Injuries often occur at theme parks, which is always unfortunate to hear. We recently reported on the injuries that came from Walt Disney World Resort and Universal Orlando Resort, which you can read more on here.

We hope that the worker who was left with an injury and rushed to hospital at Kemah Boardwalk is able to make a recovery from his fall.

Have you ever been injured while visiting a theme park? Let us know your story in the comments below.