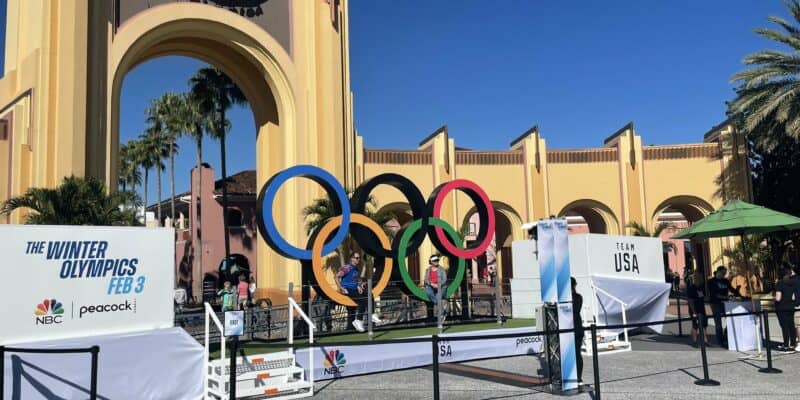 Universal Orlando Resort Guests were treated to a rare sight this past weekend.

As part of its ‘Rings Across America Tour,’ NBC Universal is taking an interactive exhibit of the five life-size Olympic rings 4,000 miles around the country and its latest stop was in Universal Orlando Resort at the entrance of Universal Studios Florida.

Over the weekend, Guests had the opportunity to take photos and enjoy the sights of something that many people never have an opportunity to see in person.

Reporter Senait Gebregiorgis posted a photo of the rings on Twitter and said:

The life-sized Olympic rings are here! Until 8pm today at Universal Studios Orlando, fans have the chance to take a free pic with the rings to celebrate the Winter Olympics which kicks off next month @WESH

The life-sized Olympic rings are here! Until 8pm today at Universal Studios Orlando, fans have the chance to take a free pic with the rings to celebrate the Winter Olympics which kicks off next month ❄️ @WESH pic.twitter.com/tZPsY5P3DY

The Winter Olympics will be covered live on NBC and streaming on Peacock beginning February 3.

While the display has now been packed up and taken to its next tour destination, Universal Orlando Resort Guests still have the opportunity to take in many rare and thrilling experiences. At Universal Studios Florida, Guests can enjoy rides like Despicable Me: Minion Mayhem, Race Through New York Starring Jimmy Fallon, Transformers: The Ride 3D, Men In Black: Alien Attack, The Simpsons Ride, E.T. Adventure Ride, as well as taking in the magic of Diagon Alley and riding Harry Potter and the Escape from Gringotts.

Over at Universal’s Islands of Adventure, Guests are treated to distinctly-themed islands that include attractions like The Incredible Hulk Coaster, Doctor Doom’s Fearfall, The Amazing Adventures of Spider-Man, Popeye & Bluto’s Bilge-Rat Barges, Dudley Do-Right’s Ripsaw Falls, Skull Island: Reign of Kong, Jurassic World Velocicoaster, Harry Potter and the Forbidden Journey, Hagrid’s Magical Creature Motorbike Adventure, The High in the Sky Seuss Trolly Train!, Cat in the Hat, and many more.

Currently, Revenge of the Mummy is undergoing major refurbishments and isn’t expected to reopen until late summer. Jurassic Park River Adventure is also closed for the next couple of weeks as it undergoes scheduled maintenance.

What do you think of the Olympics ring display at Universal Orlando? Let us know in the comments.