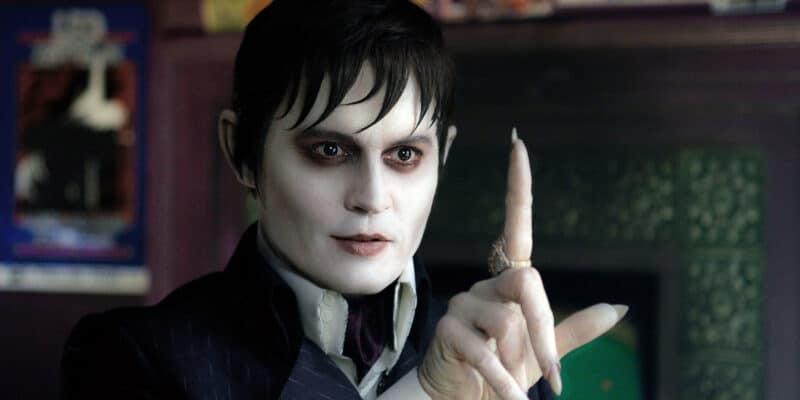 Typically, Johnny Depp films are beloved by many. From Pirates of the Caribbean (2003) to Alice in Wonderland (2010), to Edward Sissorhands (1990), and more, Depp is known to create fantastic films with incredible acting.

There is one Depp film, however, that never received the same love that many others have. Dark Shadows (2012) was directed by Tim Burton, a long time friend of Depp, and a director the actor has worked with frequently. It has a low 35% rating on Rotten Tomatoes from the critics and is not talked about with praise by many.

The film was available on Hulu for quite some time, but recently moved to Netflix. Somehow, even though the film has never garnered much success, the addition of it on Netflix has sent it soaring — landing a spot in the top 10 films and movies to watch on the streaming system!

Below, is a synopsis of the film:

Dark Shadows is a 2012 American horror-comedy-drama film based on the 1966-71 supernatural soap opera of the same name. The film was directed by Tim Burton and stars Johnny Depp as Barnabas Collins, marking the 8th film collaboration between the two. Barnabas, a 200-year-old imprisoned vampire, is unearthed and makes his way back to his mansion, now inhabited by his dysfunctional descendants. He soon runs into trouble revitalising the family’s canned fish business, as his jealous ex-flame and imprisoner Angelique Bouchard, played by Eva Green, runs the rival company. Michelle Pfeiffer also stars as Elizabeth Collins Stoddard, the reclusive matriarch of the Collins family.

The film had a limited release on May 10, 2012, before opening fully the following day, May 11, in the United States and most major territories worldwide. It was released on DVD and Blu-ray in the U.S. on Tuesday, October 2, 2012.

The film grossed $79.7 million in the United States and Canada, and $165.8 million in other territories, for a worldwide total of $245.5 million. The budget for the film was $150 million.

Johnny Depp seems to light a fire wherever he goes, and fans are clinging to the flame! Although he is not highly regarded in the media quite often as of late, his fandom continues to grow strong with support. Recently, Johnny Depp has been in some hot water when it comes to the media after his legal battle with ex-wife Amber Heard went mainstream. Heard has accused Depp of domestic violence and is suing, and Depp is countering her suit with a defamation suit. The two will not have their official court this spring, but Depp has lost a defamation battle against U.K. tabloid The Sun, who sided with Heard’s description of Depp.

James Franco and Elon Musk are two of which will be appearing on the stand for the case. Since then, Depp has gone through a whirlwind of a career spiral with both Disney and Warner Bros. dropping the actor from his respective films at each company. Removing Depp from Pirates of the Caribbean film caused instant outrage among fans, who have to singe heavily petitioned to bring the actor back.

Johnny Depp has brought up cancel culture, openly noting that no one is safe from it. Depp discusses how a claim that is not based on reality can be said, and whether it is a lie or the truth, it instantly becomes valid in referring to what he claims his situation to be. It will be interesting to see what happens after the court case concludes. Depending on the verdict, we may see Depp return to Hollywood fame once again.

What do you think of Dark Shadows? Have you ever seen the film?