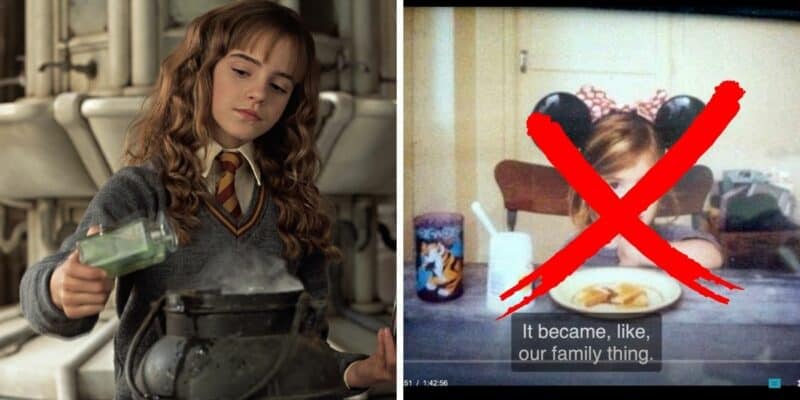 Whoopsies! The Harry Potter 20th Anniversary Reunion swept Potterheads off their brooms with a special hosted on HBOMax. But fans with eyes as fast as a seeker found errors in the documentary featuring the wrong actress as a child standing in for Emma Watson. While the company may go in and digitally fix the error for future streamers, sadly, screenshots are forever.

HBO bills the highly anticipated special as a “retrospective special, [as] Daniel Radcliffe, Rupert Grint, and Emma Watson join filmmaker Chris Columbus and other legendary Cast Members as they journey back to Hogwarts to celebrate the 20th anniversary of the first Harry Potter film.” The film franchise starring the Boy Who Lived turned 20 years old last year, and Warner Bros. is celebrating by releasing the reunion special that’s almost two hours. It contains film footage, interviews, behind-the-scenes workings, and more.

Emma Watson, who played Hermione in the Harry Potter franchise, was cast as a preteen that highly resembled her character. The smart-as-a-whip kid that grew up in the spotlight continued to star in other projects like Disney’s live-action remake of Beauty and the Beast (2017), and The Perks of Being a Wallflower (2012).

What’s amazing is that with so many people helping to create this special, no one caught this error regarding the Harry Potter star. It took fans out there in TV land to catch that Emma Robert’s childhood photo was used to illustrate Emma Watson as a kid. Twitter user Mania shared the error on a post on New Year’s Day, with plenty of dead emojis to convey his shock. His post shared the screencap from the special as well as Emma Robert’s Instagram feed, where the photo was apparently first shared. It reads,

You can see Emma Roberts’s original Minnie Mouse ear post from 2012, buried in her Instagram feed thanks to time passed by. She sits at her kitchen table as a kiddo, wearing Minnie Mouse ears and drinking from a Rajah and Jasmine character cup. Recent comments and tags regarding Emma Watson are plastered on the feed, thanks to the Harry Potter series reunion flub.

This kerfuffle could have easily been avoided if the company had asked Emma Watson personally for a childhood photo, or reached out to her parents for a similar request. Instead, it’s possible that an intern or unknowing employee was sent on a hunt for such a photo, and therefore, the mistake was made. HBO has not released any comment regarding the error, but like Screenrant mentions, it’s likely that the mistake will be edited out soon.

Did you catch the error with Emma Roberts and Emma Watson? Leave us a comment below!