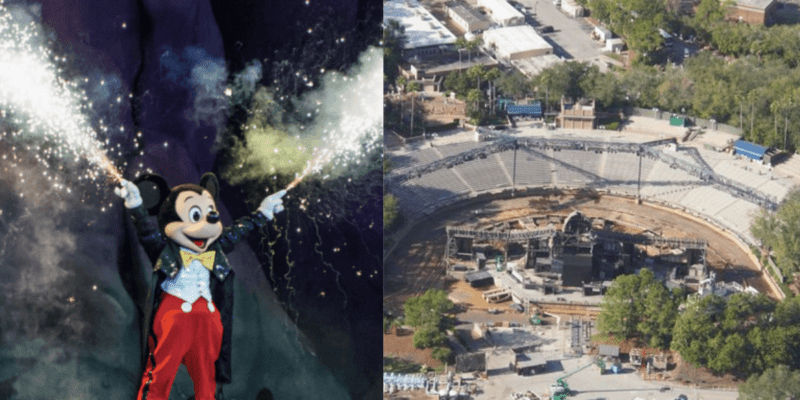 Walt Disney World Resort is home to some incredible experiences.

One major attraction that Disney fans have been anxiously awaiting to return is Fantasmic!

The nighttime spectacular has been closed since the pandemic began and remains possibly the most popular attraction to not have returned to the Disney Parks at this time.

The nighttime spectacular has been undergoing some major refurbishments and just recently we got a glimpse of how the construction is going.

@Bioreconstruct recently posted an aerial photo of the refurbishments happening at Fantasmic!

Aerial look at the refurbishment of Fantasmic. Right arrow at athletes in #WDWMarathon course entering Disney’s Hollywood Studios. Left arrow is the course near mile 23.

Aerial look at the refurbishment of Fantasmic.

Left arrow is the course near mile 23. pic.twitter.com/Xs8FgLA8XC

With new rigging and some updated technology, we can see that there have been some refurbishments completed. However, the water has not been added to the pond and since much of the magic of the show happens in the water with pyrotechnics and projectors, we would imagine it will still be a few months before the show is able to return, but Disney has not given any confirmation yet on its return date.

Until Fantasmic! returns, Guests at Disney’s Hollywood Studios will still be able to enjoy some incredible entertainment and shows including Beauty & The Beast Live on Stage, For The First Time in Forever: A Frozen Sing-Along Celebration, Indiana Jones Epic Stunt Spectacular!, Disney Movie Magic, and Wonderful World of Animation.

Let the expert team at Academy Travel help you plan your next magical vacation to Walt Disney World Resort’s four theme parks — Magic Kingdom, EPCOT, Disney’s Animal Kingdom, and Disney’s Hollywood Studios — and the Disney Springs shopping and dining district! Or, how about a trip to Disneyland Resort to experience the Avengers Campus at Disney California Adventure?

Comments Off on Disney is Getting Closer to Reopening Fantasmic!