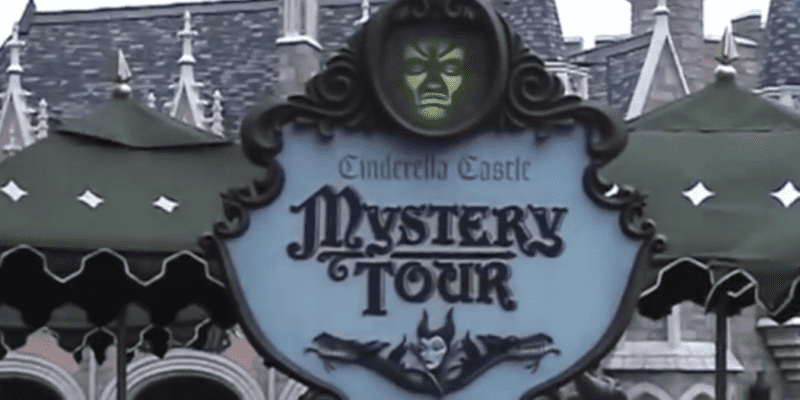 If you are ever at Disney, the idea of riding a “scary” attraction is not something that most Guests have to face. Attractions such as Tower of Terror, Haunted Mansion, or Phantom Manor give off a spooky vibe, but even those were designed with kids in mind, so the horror aspect is not large. That being said, there are rides Disney has had to remove due to the level of fear they produced.

At Walt Disney World Resort, a popular attraction that many associates with being removed due to it being too scary was The ExtraTERRORestrial Alien Encounter. The ride shut down in 2003 after Guests complained that it was too terrifying to ride, especially for the kids visiting Magic Kingdom. The Tomorrowland attraction then became Stitch’s Great Escape! which is now closed down as well.

But, The ExtraTERRORestrial Alien Encounter was not the only attraction to be removed due to Guests commenting on the ride being too scary to experience at a Disney Park. At Tokyo Disney, the Cinderella Castle Mystery Tour was a walk-through attraction at Tokyo Disneyland that ran from July 11, 1986, to April 5, 2006, which centered around the Disney Villains. Guests would tour haunted dungeons that lay under Cinderella Castle, which they were led to through secret entrances. The tour would begin normally, but then, things would change as the Magic Mirror would open a door to the dungeon and change the course of your tour.

Guests would face off with Disney villains, but at the end of the walk-through attraction, a Guest would be chosen to save the say. Despite this positive ending, it seems that Disney was still forced to closed the attraction due to the fear it produced. Disney TikTokers The Mouselets (@themouselets) posted a video explaining the closure as well.

If you are interested in understanding the plot of this attraction, below is a description of what happened in the walk-through and what rooms Guests would enter.

Taking place inside Cinderella Castle, guests are supposed to take a tour of the Castle featuring the Gallery, Ball Room, Dining Room, Guest Room and the Tower. However, after the guide showcases portraits of Disney Heroes and Heroines, the Magic Mirror gets angry at the villains being insulted!

To see how strong the guests are in challenging the powers of evil, the Magic Mirror opens a secret door the leads to a concealed underground area of the castle. A dark stairway leads to a prison area filled with howling bats staring at the guests.

In the lab of the Queen aiming for the Snow White’s life, a book with a recipe for a poison apple is found. Also, a magic potion is being brewed along with an assortment of experimental tools. Moreover, the crow from the film stands atop a skull with ceaseless cawing. The shadow of the Queen can also be seen on the walls.

There is a dark passage and dungeon that awaits guests who bypassed the laboratory to avoid being noticed by the queen. However, guests are tricked by a random Magic Mirror that reflects directions inversely. Next, a mummified ghost appears from a dark area but its white reflection does not appear anywhere, rather we can hear its footprints advancing.

A scene can be witness at the top of the frightening oubilette. Guests can see Chernabog, from the film “Fantasia,” gathering all the forces of evil against goodness.

There is a calm area where water flows. It seems to be nothing is happening there too. However, suddenly Malificent’s goons show up! The Sleeping Beauty characters appear in the water, within the walls. The goons eye and threaten the guests escaping before angering Malificent even more. Lastly, we can see the Witch on the castle covered with thorny bushes that have reached all the way down the the basement!

The Cave of the Hidden Jewels

Continuing down the dark passages guests encounter a talking skull warning them of the perils ahead. However, we see shiny objects that turn out to be countless emeralds and rubys all over the cave. Suddenly, lightning strikes and a huge dragon appears. The dragon seems to have been awakened! The guide finds a special lift and leads the guests’ in just barely escaping the dragon. However, the lift is controlled by a goon and the guests are taken up the castle.

As we leave the lift, we enter a room with some tapestries depicting the “Legend of the Black Couldron” hanging on the walls. The guide explains, “Once upon a time the world was ruled by evil. The Horned King, the evil lord, used the black cauldron (Satan’s kiln) to manipulate and control the soldiers of death. Then the courageous and pure-minded hero, Taran, deprived the power of the great kiln using his sword of light. And peace was restored to the world.”

The Magic Mirror appears again to interrupt the guide. It invites guests to enter a back room next to the tapestries room as the doors close in. It is the Black Cauldron’s room! “This is the final challenge. Will good win or evil prosper? The good will face this challenge with courage. The Black Cauldron is waiting to swallow you whole.” The Magic Mirror disappears. A guest is chosen as the brave representative to carry the sword of light against the Horned King.

Battle with the Horned King

The door opens to an eerie hall that has skeleton soldiers lying on the floor. The sword of light (Taran’s sword) is to the right, and the Black Cauldron is at center atop a pedestal. Slowly, the Horned King appears and looks down to see that his enemy is still alive.

Just then, the special guest points the sword of light towards to Horned King. It is blasted away! It has lost! And the hero’s goodness triumphs!

The guides leads the guests and makes a special presentation to our new hero!

The walk-through videos for the ride are quite dark, but you can check out what happened in the full video below!

What do you think of the Cinderella Castle Mystery Tour? Was it too scary?