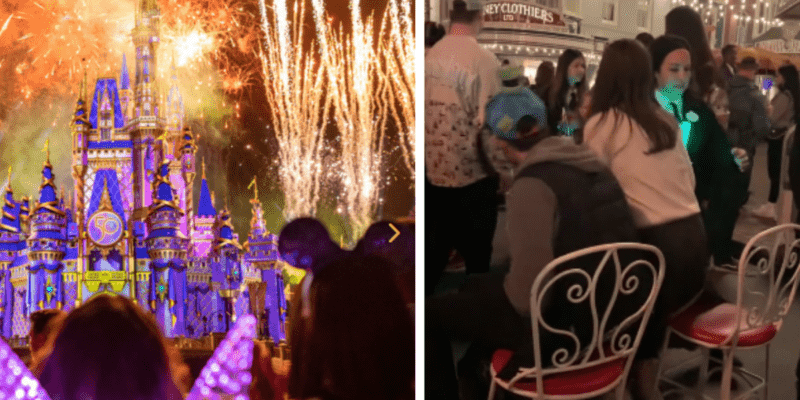 Walt Disney World Resort is home to many iconic attractions that bring Guests from all around the world to its theme parks.

Disney World has four theme parks– Magic Kingdom, Disney’s Hollywood Studios, Disney’s Animal Kingdom, and EPCOT– that all have distinct themes and something for everyone.

One of the most popular experiences at Magic Kingdom is Walt Disney World’s newest firework spectacular, Disney Enchantment.

Disney World Guests begin lining the sidewalk of Main Street, U.S.A. and the courtyard in front of Cinderella Castle hours before the show is set to begin to get a good viewing spot.

@the_hamilyfamily recently posted a video on TikTok of Disney Guests who attempted to make their viewing of the show a little more magical by dragging chairs likely from a nearby shop to the middle of Main Street, U.S.A. so that they could sit and enjoy the firework spectacular.

As you can see in the video above, the Guests are approached by a Walt Disney World Resort Cast Member and immediately stand up when the Cast Member tells them that bringing chairs out to the viewing area is not allowed. The Cast Member then took away the chairs to return them to their rightful spot.

What do you think of this Guest encounter at Walt Disney World? Let us know in the comments below!