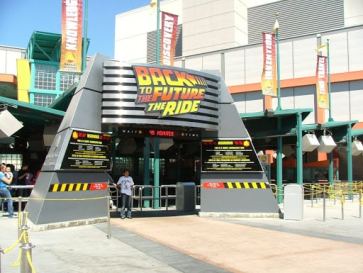 Universal Orlando Resort has changed immensely from when it opened in June of 1990.

At this point, there are only two attractions remaining in Universal Studios Florida that were a part of the Park when it opened more than 30 years ago and those are E.T. Adventure Ride and The Monster Horror Makeup Show.

Everything else has been closed and many new thrilling attractions have taken their place.

As Universal Orlando looks forward to the creation of the Epic Universe— its newest theme park that could potentially open in 2025– many fans are wondering if the Resort will somehow pay homage to its original rides.

u/MovieFanZ5026 posted a thread on Reddit where they mentioned a potential ‘Retro Throwback Area’ in the Epic Universe that could entail attractions like Back to the Future, Jaws, Twister, and Kongfrontation.

I don’t know if we’re going to but I would love to see a retro throwback area at Epic Universe. This way I guess that haven’t ridden some of these old attractions can finally get to

You can get such attractions as twister, jaws, Kongfrontation, and back to the future. Who knows maybe bring back the wild west stunt show and earthquake

Would you like to see a land at epic universe devoted to old attractions?

User u/Brookings18 said they could get on board with the idea.

Not a land for all the old attractions, but going back to older rides and remaking them is a good idea. I personally would love a fully realized Hill Valley and modern Back to the Future ride.

And User u/TadWaxpole agreed that precedent at least had been set with Universal bringing back King Kong in Skull Island: Reign of Kong in Universal’s Islands of Adventure.

Well they did bring back Kong in at least some capacity, so there is some precedent for reviving long lost attractions.

Of any of them, I’d love to see a new reboot of Jaws, but with today’s technology.

While many users liked the idea, user u/JohnSpangler said the closest they believe we’ll get to retro is the rumored Universal Monsters area in the Epic Universe.

The most retro we will see is the Universal Monsters area. Which will have a ride and a show and space for a third attraction after EU is open.

While going on some old retired rides would be enjoyable enough what you are asking for is pretty much Universal Studios Land in Epic Universe.

And we have Unjversal Studios land. It’s called Universal Studios. It’s not the same as when it opened but that’s not a bad thing nothing should remain static forever.

While the thread was about the Epic Universe, User u/EatatFiveGuys said they believe the path to retro attractions returning would be at Universal Studios Florida, rather than the new theme park.

Definitely a good idea, tho they can work it into USF. Twister is unlikely to come back due to the age of the movie and it not being as recognizable as Jaws or BTF. Kong has already come back and I don’t think they’ll have another Kong ride. I could see them maybe making a classics section in USF by adding ET to the main pathway and replacing Simpsons once it has to close and MIB already would fit. I think that would work out well since it manages to put a bunch of out-of-place properties together.

Universal fans are known for their love of nostalgia. If you go to Universal Orlando Resort at any given time, you’ll find plenty of ‘throwback’ merchandise and homage to old attractions.

That being said, there has been no confirmed plans in the work for Universal Orlando to have a retro-themed world in the Epic Universe despite the love that many fans share for classics like Back to the Future (1985), Jaws (1975), and Twister (1996).

Rumors, for now, with the Epic Universe include Super Nintendo World, Universal Classic Monsters, an addition Wizarding World of Harry Potter area, and a DreamWorks World.

What do you think of a ‘classics’ world in the Epic Universe? Let us know in the comments.