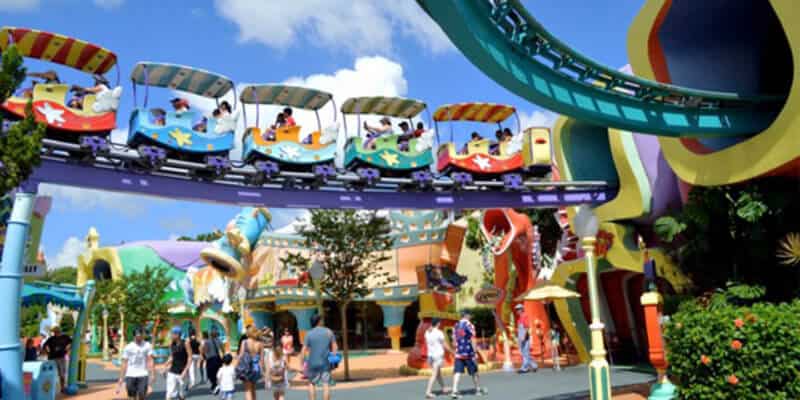 Universal Orlando Resort Guests had an opportunity to see more of the Park than they probably planned to recently.

With so many mechanisms moving and working at one time, it’s inevitable that rides will sometimes fall victim to breaking down.

TikTok user @savage_mom13 recently posted a video where they had been stranded on The High in the Sky Seuss Trolly Train Ride!, located in Seuss Landing at Universal’s Islands of Adventure.

Got Stuck on a Ride for 30 mins at Universal. #universalstudios #florida #StepandFlex #fyp

Got Stuck on a Ride for 30 mins at Universal. #universalstudios #florida #StepandFlex #fyp

In the above video, they say that they had been stuck on the ride for 30 minutes and eventually we can see Team Members at Universal Orlando Resort coming to evacuate Guests from the ride. For those who are unfamiliar, The High in the Sky Seuss Trolly Train Ride! is an attraction that takes Guests around Seuss Landing suspended in the air.

Guests had to exit the ride on the safety platform next to the trolly and then make their way down the stairs to return to the Park.

As you wait to board this slow-moving trolley, you’ll be treated to a retelling of the Sneetches. Then, sit back and relax as you wind your way above the imaginative buildings and rides of Seuss Landing. There are two ride tracks—one continues the story of the Sneetches, while the other takes you through the ABCs of your other favorite Seuss stories.

The High in the Sky Seuss Trolly Train Ride! recently was modified due to a safety hazard. The attraction was updated with safety nets in between the cars to ensure that Guests do not walk between the cars. This has reportedly happened in instances where Guests are attempting to switch seats or cross to the other side of the train station when boarding or exiting the train.

Have you ever been evacuated from a ride at Universal Orlando Resort or Universal Studios Hollywood?