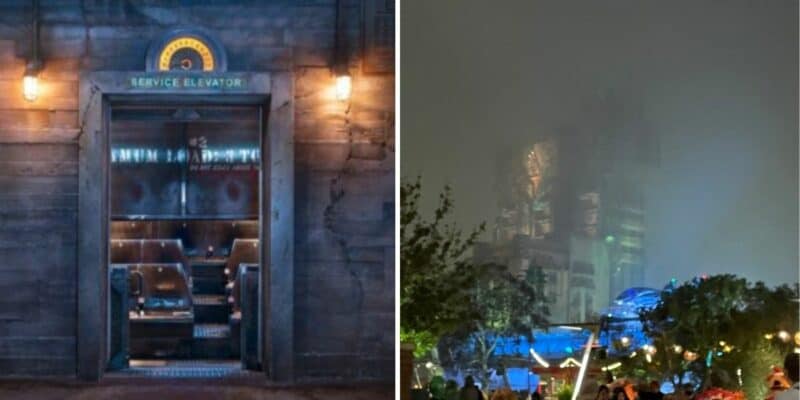 If you are a fan of Tower of Terror, you were likely sad to see it leave Disneyland Resort. In 2016, the Rod Sterling hosted attraction was announced to make a final drop quite shortly, as Disney was transforming the attraction to fit with their Avengers Campus in Disney California Adventure.

The attraction had its final run on January 2, 2017, and is now themed to Guardians of the Galaxy – Mission: Breakout! The new iteration of the attraction is still full of the same fun drop sequences, except this time, Rocket is guiding you through a much more chaotic, fun, and less scary ride with fantastic music from the movie’s soundtrack. The new version of the Disney drop ride may be a good one, but there are still folks who miss its predecessor.

Just recently, however, it looked like the Tower of Terror may have returned to Disneyland! Andrea Believes in Holiday Magic (@andreajessica) posted an eerie photo of the attraction. With all of the fog, the ride almost looks like it is experiencing the classic Haunted Mansion peppers ghost effect! It truly looks like one dark and stormy night…

At Disneyland, the official description for Guardians of the Galaxy – Mission: Breakout! reads:

Step Inside a Towering Citadel
Taneleer Tivan, a.k.a. the Collector, has brought his unique collection of fantastical fauna, relics and species from across the cosmos to earth for the very first time. He offers to show you his newest acquisition… the Guardians of the Galaxy.

Scarlett Johansson will also soon be joining The Twilight Zone as a producer and actor in Disney’s new live-action film. While her Black Widow legal drama left her on a tipping board when it came to joining Disney on a new project, things worked out in the end.

Do you think that this Guardians of the Galaxy – Mission: Breakout! look is spooky? Let us know in the comments below!