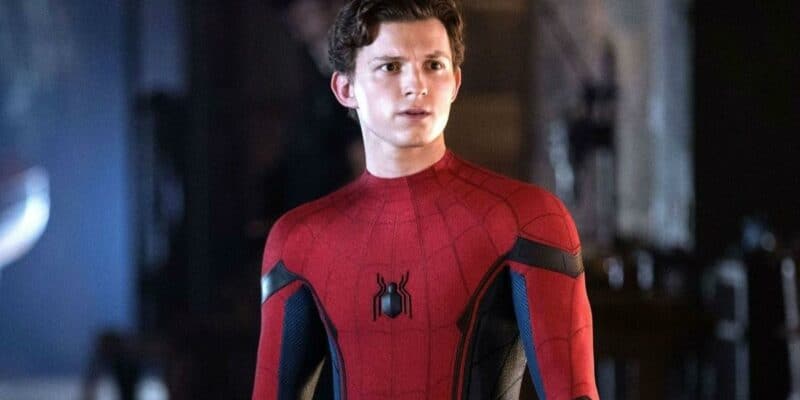 Spider-Man: No Way Home (2021) will be swinging into theaters this weekend, and fans are going crazy trying not to stumble upon spoilers.

The movie– starring Tom Holland (Peter Parker/Spider-Man), Zendaya (MJ), Benedict Cumberbatch (Doctor Strange), Jacob Batalon (Ned Leeds), and a plethora of others– made its way to the big screen for the preview screening this week and has already received record reviews on Rotten Tomatoes.

Holland recently was interviewed by ComicBook.com, and he was asked about his back-and-forth friendly banter with Anthony Mackie, who plays Falcon/Sam Wilson/Captain America in the Captain America movie franchise.

Mackie shared photos on Instagram riding WEB SLINGERS: A Spider-Man Adventure at Disneyland Resort and issued a challenge to Holland, betting he couldn’t beat his score. That’s when Holland revealed that he had never actually ridden the ride.

“Listen, I love Anthony Mackie. If there’s a Spider-Man/Captain America team-up down the line, then we should absolutely make that happen. You know, he can brag about beating me on my own ride – which I haven’t actually ridden yet – but until he’s got his own ride, he’s got nothing. He doesn’t have a leg to stand on,” Holland joked.

Disneyland’s official website offers this description of the attraction:

We’d be game to see Holland and Mackie go head-to-head in WEB SLINGERS: A Spider-Man Adventure, but there’s no doubt Mackie would have a decided advantage when it comes to experience.

Will you be seeing Spider-Man: No Way Home this weekend?