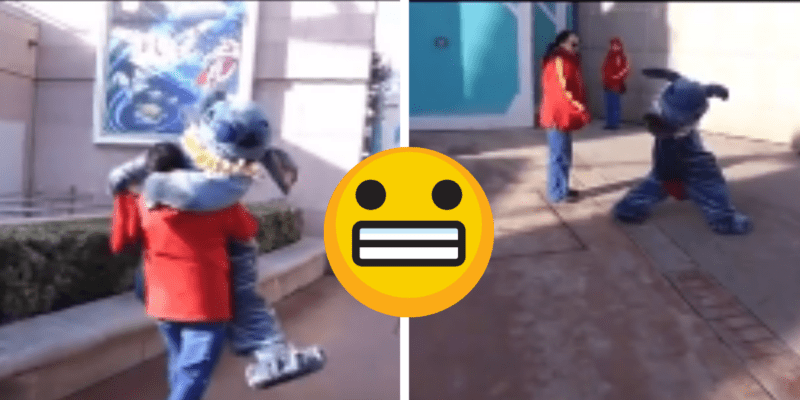 Meeting Walt Disney World Resort and Disneyland Resort characters are one of the highlights of a Guest’s trip to the Disney Parks.

Even though character meet-and-greets are still distanced currently, Disney World and Disneyland Parkgoers have the opportunity to still see many characters and take their pictures with them as they make their way around the Parks.

In a video posted by @_disney._stuff_ on TikTok, we can see Stitch and a Disney Cast Member having a bit of a confrontational exchange.

Stitch hilariously takes the Cast Member’s hat and the Cast Member chases after him and eventually picks him and carries him. He gets away and wipes the hat with his backside before eventually running away. The video was posted just a couple of days ago and already has more than 141,000 likes.

Stitch is always playing jokes and causing trouble. He does a great job of being the life of the party and there’s never a dull moment when Stitch is around.

Of course, Stitch was made popular from the movie Lilo & Stitch (2002) where we learned that “Ohana means family, and family means no one gets left behind or forgotten.”

Here’s what DisneyWiki says about the film:

Lilo & Stitch is an American animated science fiction comedy-drama film produced by Walt Disney Feature Animation and released on June 21, 2002. The 42nd animated feature in the Disney Animated Canon, it was written and directed by Chris Sanders and Dean DeBlois and features the voices of Sanders, Daveigh Chase, Tia Carrere, David Ogden Stiers, Kevin McDonald, Ving Rhames, Jason Scott Lee, and Kevin Michael Richardson. Lilo & Stitch was the second of three Disney animated features produced primarily at the Florida animation studio located at Walt Disney World’sDisney-MGM Studios in Orlando, Florida. Lilo & Stitch was nominated for the 2002 Academy Award for Best Animated Feature, which ultimately went to Hayao Miyazaki’s film, Spirited Away, which was also distributed by Walt Disney Pictures, and featured a voice-over performance by Chase and Stiers in the English dub. It is one of the few Disney Animated Canon films to have an original story.

From that original came several sequel movies and even a Disney Channel original series, Lilo & Stitch: The Series, which ran from 2003 to 2006.

Though there has not been a recent adaptation of the movie or television series and Stitch’s Great Escape has officially closed forever at Magic Kingdom in Walt Disney World Resort in Florida, both Lilo and Stitch remain popular characters in the Parks.

What was your experience like meeting Stitch? Let us know in the comments.

Comments Off on VIDEO: Stitch and Disney Cast Member Get Into Confrontation