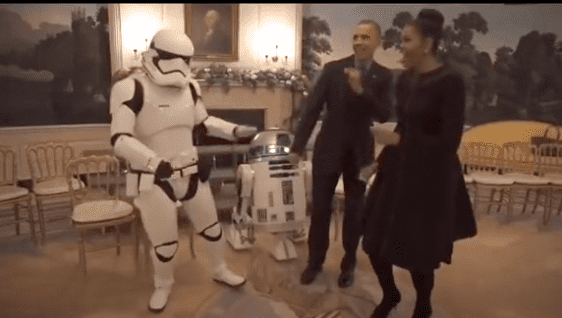 A video is resurfacing on TikTok that shows the Obama’s dancing to “Uptown Funk” by Bruno Mars alongside R2-D2 and stormtroopers. The video begins with Michelle Obama yelling “This is my favorite song, how did you know?” quickly followed by former President Obama saying, “Come on Stormtroooper, come on!” right before an entire dance party breaks out.

You can view the full TikTok here:

For Star Wars fans who wish to have the chance to dance with Stormtroopers themselves, be sure to visit Star Wars: Galaxy’s Edge at both Walt Disney World and Disneyland Resort. The Star Wars-themed land is home to two unique attractions, Rise of the Resistance and Millennium Falcon: Smugglers Run.

Guests visiting the land may also bump into characters from the Star Wars saga including Stormtroopers, Chewbacca, Rey, and more. Disney Parks describes this land at Disney World and Disneyland as:

Discover Star Wars: Galaxy’s Edge at Walt Disney World Resort and the Disneyland Resort, where you can live out your own Star Wars story, fly the Millennium Falcon and explore a remote outpost where adventure awaits.

Did you find this TikTok video of Barack and Michelle Obama dancing with R2-D2 and Stormtroopers funny? Let us know in the comments below.

If you want to book a Disney vacation and visit Star Wars: Galaxy’s Edge at either Walt Disney World or Disneyland — be sure to reach out to our friends at Academy Travel, who will be with you every step of the way when planning your magical Disney vacation.

Comments Off on VIDEO: Former U.S. President Dancing With R2-D2 and Stormtroopers