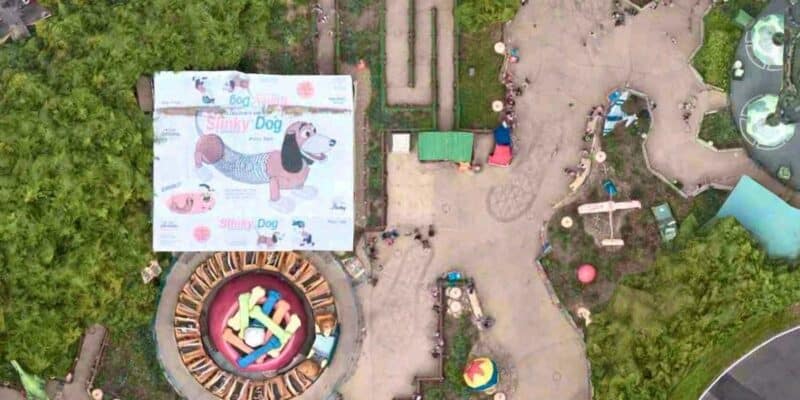 If you have ever been to any of the Disney Parks, you know that all of the details that surround the Resort are quite magical. From the small markings on the grounds, to the larger-than-life characters and technically advanced animatronics, there is a ton to marvel at.

Disney is even sure to make the top of its theme parks and attractions themed for the birds to see! When Guests visit Disney’s Hollywood Studios, they will be able to enjoy Toy Story Land. Here, Guests can enjoy eating from Woody’s Lunch Box while sitting on a giant Babybel, while also riding Slinky Dog Dash, Alien Swirling Saucers, and Midway Mania!

When Guests enter Toy Story Land, the point is that they should feel like they have shrunk down to a tiny-sized toy, and now, they are taking the perspective of those from the Pixar film. Benches are made from popsicle sticks in this world, and everything feels larger than life. Even the floor has giant footprints, which seem massive to us as shrunken toys, but in reality, they are just regular-sized human footprints. The same can be found in Toy Story Playland at Walt Disney Studios Park at Disneyland Paris Resort!

One little fun easter egg here, however, is that when Guests enter the store, you can see that you are actually entering into the toy box of Slinky Dog, which is a fun response to the attraction in Florida! This can be found in Worlds of Pixar. AirMagique Disneyland Paris Podcast (@air_magique) Tweeted the photo to show off the box!

If you look at Toy Story Playland from above you can see Andy’s footprints 👣 (plus a Slinky Dog toy box print) in Walt Disney Studios Park at Disneyland Paris 🏰 pic.twitter.com/1dHpqpZsDA

The store is described as:

What could be better than the Toy Story films? Only toys of those toys! And they’re all here: Woody, Buzz, Jessie, Bullseye… Whether you’re after a realistic souvenir, a cuddly toy or Toy Storytastic accessories, head for this playroom.

Joining the Toy Story family will be the new Toy Story hotel opening in Tokyo Disneyland!

What do you of this fun easter egg? Let us know more in the comments below!