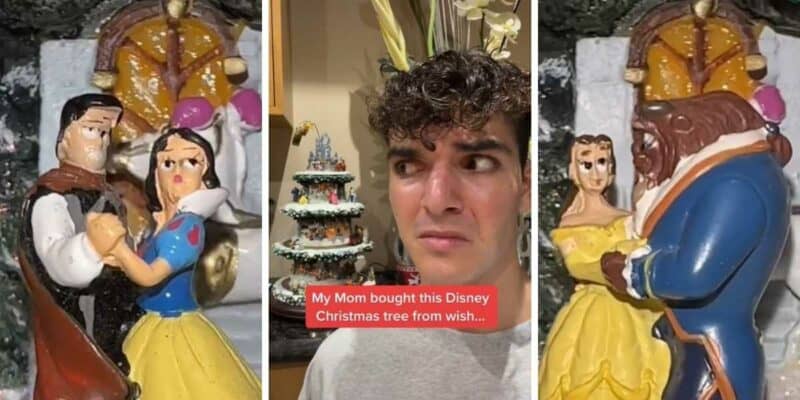 Have you ever ordered something online only to find it’s not what you thought you were getting? Well, it seems like that is the case here as a horribly done Disney Christmas tree is going viral with over 4.2 million views for its rather terrifying sculpture/paint job of beloved Disney characters.

RELATED: Watch as Fan Turns Tree Into ‘The Nightmare Before Christmas’ Scene

Disney Princesses and Princes are some of the most stunningly animated characters ever created. But, that’s doesn’t come across in this scenario.

First up, you’ll spot Prince Eric and Princess Ariel which @sebbylaz calls, “The Little Bulga Whale”. Then, you’ll see Prince Charming and what should be the stunning Princess Cinderella… instead given the name, “Cinderfella”. Snow White and her Prince look just as rough as @sebbylaz calls her “White Snow”. Up next, Prince Phillip and Princess Aurora are giving the names “Sthleeping Beauty and Prince Charles”. Beauty and the Beast are now “Beast and Beast”. And, last but not least is Pocahontas and John Smith are “Hocapontas”. Check out the video for yourself below or click here:

OH. MY. WORD. We aren’t sure what happened when this was created, but it’s definitely not something we’d want up in our house! @sebbylaz tags #wishshopping which if you haven’t heard of Wish Shopping, well they don’t have the most excellent reputation or reviews. This poor mother was just trying to spread a little Disney Christmas cheer!

Would you leave this Disney Christmas tree up in your house for the holiday season? Let us know in the comments!