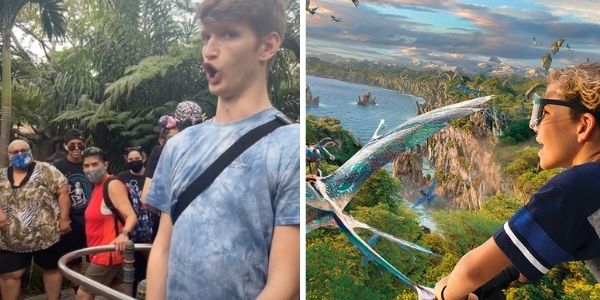 Just something to kill the time.

Walt Disney World offers an almost unlimited selection of rides, attractions, and experiences for Guests to encounter. Whether you’re on a runaway train in Mickey and Minnie’s Runaway Railway at Disney’s Hollywood Studios, or you get soaked down to your shoes on Splash Mountain at the Magic Kingdom, Walt Disney World has some truly amazing rides and attractions for Guests to experience. One thing that isn’t so fun to experience however is the long lines that Guests have to wait in.

One Guest, however, decided to have some fun while in line for one of Walt Disney World’s most popular rides.

Flight of Passage at Disney’s Animal Kingdom’s recent Pandora – The World of Avatar expansion is one of the most breathtaking rides in all of Walt Disney World. This also means that it has become one of the most popular and usually sits at multiple hour wait times each day. One Guest decided to break up the monotony of waiting in line by serenading the Guests around him with a classic Disney song.

Dane Drennan (@danedren) shared the video on TikTok, take a look below:

In the TikTok, the Guest can be seen and heard enthusiastically singing one of Disney’s classic songs from its animated film The Little Mermaid (1989). Some Guests seemed to like the singing while some had no idea what was happening. But hey, at least it’s something to do while waiting in line.

More on Flight of Passage at Disney’s Animal Kingdom:

Is Flight of Passage at Animal Kingdom one of your must-do attractions? What is the longest you’ve waited in line for a ride at Walt Disney World? Let us know!