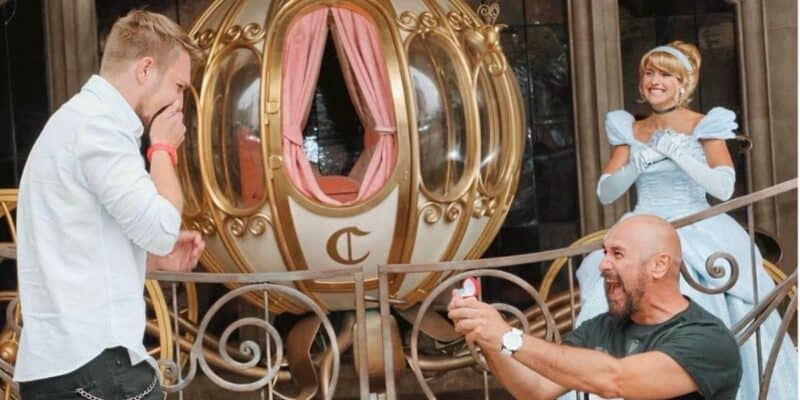 He said yes!! A “Charming” Disney proposal happened at Disneyland Paris, between two Disney lovers and right in front of Cinderella and Prince Charming! The adorable photo opp featuring Sven’s show turned into a surprise proposal for the two lovebirds!

Sven and Michael Ottertown love to visit Disneyland Paris. After 19 months of missing out on Park-going, the two returned to the European Disney theme Park with palpable excitement. What Sven didn’t know was that Michael was planning a surprise Disney proposal during a Cinderella meet and greet!

After posing with Sven’s white sneaker and mugging for the camera, Sven reaches for his shoe to put it back on… but then Michael pulls out a ring box! Sven is shocked to see that his long-time boyfriend is asking him to marry him! What’s more, is that Michael was so nervous, he fumbled the ring box, sent the jewelry FLYING, and had to regroup with the help of Sven.

Cinderella is beaming from behind, as the couple slips on the costume ring and poses for a photo. Michael quickly whips to the side to remove his shirt, showing the underside… a custom tee commemorating the event! Here’s the clip from Sven of the proposal!!

If you can’t quite make it out in the aforementioned photo or videos, this is a close-up look at the ring and jewelry box that Michael Ottertown presented to Sven. It’s actually a symbolic costume ring that looks like Cinderella’s glass slipper!  While Sven’s post about his ring is in German, we’ve roughly translated it to English for you,

You guys are crazy! I’m just grateful and full of love right now! It makes me so happy to see that so many people are happy for us. I wanted to take this opportunity to thank you from the bottom of my heart for all the congratulations and to show you my symbolic engagement ring! 🏰 Since we had partner rings made a few years ago, I got this symbolic Cinderella glass ring for engagement and it is perfect! 💖 But for the wedding we have something very special engraved on our rings. Thank you @michael_otter for thinking of the last little detail and making this moment so special for me! ⠀
⠀
#isaidyes #engaged #engagementring #engagement #ring #disney #disneyland #love #wedding #disneylandparis #disneycastle

And after the ring presentation, Michael whipped out a shirt for Sven, too! The matching Disney couple shirts commemorate the Disney proposal in vintage ringer tee style, showcasing the old VHS Disney opening reel. Michael’s says, “He Said Yes!” while Sven’s reads, “He Finally Asked!” This was such a cute addition to the magical day at Disneyland Paris. Well done, Michael!

The couple tied the knot on November 15, just a few short months after the amazing proposal. They shared their Instagram-worthy “Just Married” looks on social media, along with their happy (yet tearful) vows and ring exchange.