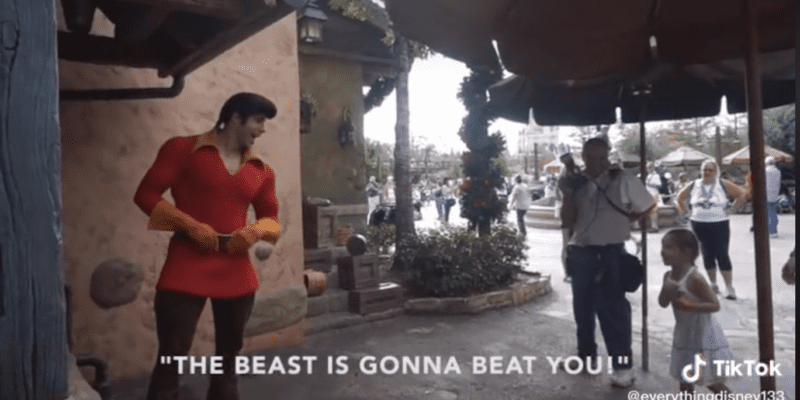 Gaston: Dismissed! Rejected, publicly humiliated. Why, it’s more than I can bear
LeFou:  More beer?
Gaston: What for? Nothing helps, I’m disgraced…

And disgraced he is! Put into his place by a “tiny enchantress,” Gaston can’t keep up as the hits keep on coming. His short-in-stature visitor during this (before Covid) meet and greet gives him a piece of her mind… he will “never ever, ever” marry Belle!

Deep within the Enchanted Forest in Fantasyland lies Gaston’s Tavern. Not too far away can be seen Beast Castle looming from the mountains, while Belle’s cottage contains magical stories for those that venture inside. But alongside the stucco and thatched roofline, Gaston awaits his many suitors… um, visitors. Before 2020, he met during the day, up close and personal with Guests and a Disney PhotoPass photographer.

One day, a “tiny enchantress” met with him, and gave him a fight he most certainly did not win. Boasting with the confidence of a tiny tot, this unknown little girl, captured on film by Jona and then “re-tik-ed” by @EverythingDisney133, lays her hands on her hips and emphatically tells Gaston how he will never ever, ever marry Belle and that the Beast has turned into a handsome Prince. No match, for certain, with Gaston.

Flustered with her confidence and unbridled comebacks, Gaston attempts to nay say each turn, but amusingly, we see he is no match for her. Below, you must watch the entire video and hear how Gaston is publicly humiliated in front of the Disney crowd.

Do you think he was put into his place? Gaston certainly played his part with both villainous motive and boastful charm. While Gaston certainly won’t put up with offensive behavior or outright adult rudeness, this strong-willed little girl was not harmful. We can’t wait to see if Gaston thinks he had met his match!

What do you think of this Gaston interaction? Leave us a comment below!

Comments Off on Gaston “Publicly Humiliated” by a Tiny Enchantress