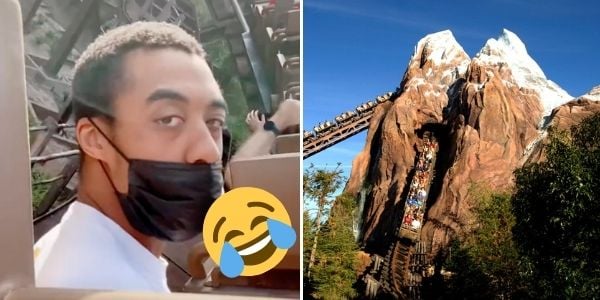 Rollercoasters aren’t for everyone, I guess.

Walt Disney World offers so many fantastic and exhilarating experiences, and with the addition of both Star Wars: Galaxy’s Edge and Pandora – The World of Avatar, the long list of exciting attractions have only gotten better. Rides like Flight of Passage and Star Wars: Rise of the Resistance are both incredibly immersive and thrilling rides for all Guests, but one particular Guest thought otherwise.

One of the most popular rides in all of Walt Disney World can be found at Disney’s Animal Kingdom. Located in the Asia section of the Park, Expedition Everest – Legend of the Forbidden Mountain is a chilling coaster that puts Guests face to face with the mystical ‘Yeti’One. Guest, however, had quite the opposite reaction when they were on board the attraction. TikTok user FarrisFilmsYT (@farrisfilms) posted a video in which a Guest seemed to not care or even know they were on an exhilarating snow-covered rollercoaster at all. See the video below:

The Guest hilariously remains motionless, almost lifeless as the coaster speeds up, down, and around the track. It’s almost impressive to be able to keep a straight face while going 50+ miles per hour, both forwards and backward. More on Expedition Everest – Legend of the Forbidden Mountain here:

Some parts of Expedition Everest – Legend of the Forbidden Mountain may be scary for children. This attraction features loud noises, fast drops, high speeds, dark places, and frightening creature effects.

Could you keep a straight face while riding Expedition Everest? What’s your favorite ride at Disney’s Animal Kingdom?