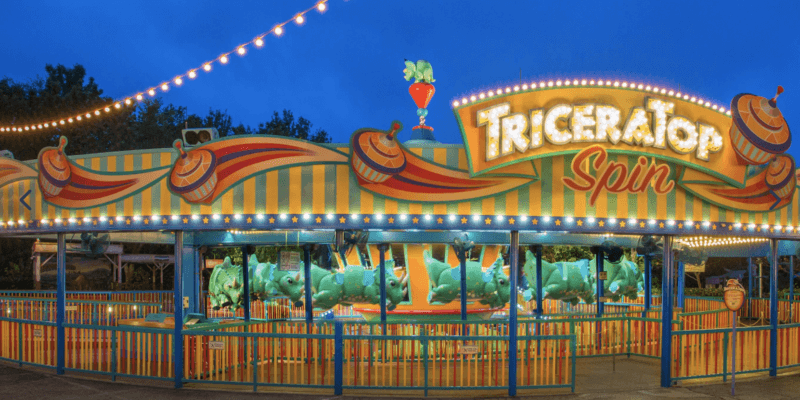 When Guests go to Walt Disney World Resort, one of the things that they will notice is that no matter where they go, the property is always clean.

With garbage, only a few steps away and custodial Cast Members always around to sweep and clean up, it’s tough to make a mess at Disney World! Even gum is not available to be purchased on property so that there is less of a chance that there will be a sticky mess to clean up. That being said, of course, that may not always be the case.

A while back, we wrote on a Guest defecating at Universal Orlando Resort after experiencing the Shrek 4-D ride. The incident took place in an exit queue and not a washroom, drawing quite a bit of attention. After reporting on that story, we had a reader reach out to us to tell another in the same vein.

Shawn G. previously worked at Disney’s Animal Kingdom on the TriceraTop Spin attraction and recounted an incident where defecation was mistaken for mud. Below is the full story, as noted by Shawn.

It was a rainy day and people were shuffling through the paddock watching the trike. Because it was a wet day we didn’t really notice the “mud” stain being tracked through, and honestly, the scent cannon is supposed to be pumping in the smell of animals, but they used the old ones from Main Street that were used for cookies, so every time the “dino” farted it smelled like baked goods. We figured they got it working.

As the crowds dwindled tho we realized this wasn’t the case. Somewhere during the day someone had defecated amongst a crowd of at least 35 people and everyone just kept walking, smearing it all over the floor, and their shoes.

Because the incident was not realized until much later, Shawn was unsure what Guest may have been at fault. Since this is a popular child’s attraction, there is a chance that it was a young one who mistakenly did this instead of an adult. Of course, it should be noted that Guests must always use the designated restrooms when they feel that they must, and not do that action in public. If caught, the Guest will very likely be removed from property, as we have seen in the past with a Guest publically urinating at Disneyland. In this specific case, there was a restroom only steps away in DinoLand U.S.A.

A Dino Ride in the Sky
Climb into a 4-person triceratops gondola and prepare for liftoff! Bob up and down, forward and back, as you sail through the air to festive music. Don’t be surprised if something prehistoric appears from the giant crown in the center of the top.

How High Will You Fly?
If you’re seated in the back row, you can direct how high or low you fly by moving an onboard lever up or down. If you’re sitting in the front row, maneuvering a joystick will tip your dinosaur forward or backward.

What is your favorite restroom at Walt Disney World? Let us know in the comments below.

Comments Off on Disney Guest Once Defecated Publicly in Attraction Queue, Other Guests Spread the Mess