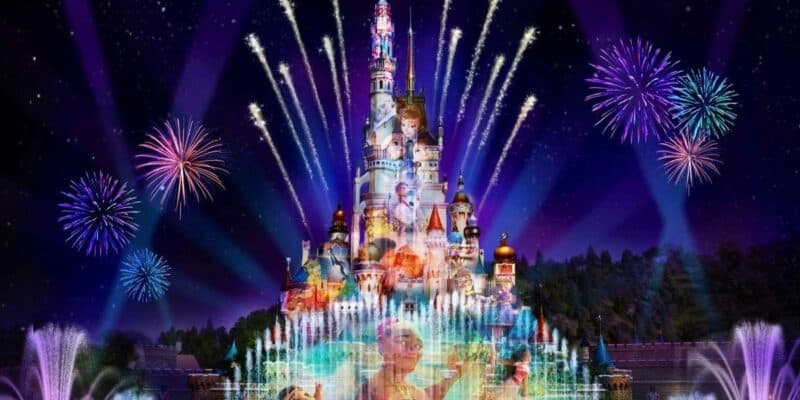 One of the best things about the Disney Parks is that there is so much more than just attractions when you visit.

Of course, the attractions are spectacular and incredibly immersive aspects of the Disney Parks. Still, one thing that sets Disney apart from many other theme parks is the attention, detail, and high level of excellence that we see in their entertainment. From stage shows to character meet and greets, Disney can sweep Guests off their feet in reality and pull them into a world of fantasy.

The most recent change that we saw in terms of new nighttime spectaculars at the Disney Parks took place at Walt Disney World Resort. Magic Kingdom removed the beloved Happily Ever After firework show and added in Disney Enchantment to celebrate the 50th anniversary and possibly beyond.

Now, it looks like a new nighttime spectacular will be coming to Hong Kong Disneyland’s Castle of Magical Dreams in 2022. DLP Report (@DLPReport) took to Twitter to share the news!

A new nighttime spectacular “Cherish the Memories” will premiere on Hong Kong Disneyland’s Castle of Magical Dreams in 2022. Lucky Guests!

As noted by Disney Fandom, “Unlike its predecessors Disney in the Stars and We Love Mickey!, this new show includes projection mapping, lasers, and searchlights, as well as pyrotechnics and water fountains.”

The publication continued to discuss the show’s opening timeline:

The show was originally scheduled to open in Fall 2020 in time for Hong Kong Disneyland’s 15th anniversary celebration. However, it was delayed to 2021, since the opening was postponed indefinitely following the closure of the park due to the coronavirus pandemic.

It seems the show is confirmed to have Princess and the Frog scenes and The Little Mermaid; aside from that, there will be plenty more scenes and songs from Disney films we know and love. In the concept art, we can also see a Moana scene displayed. The show will also utilize lasers and fountains on top of the projection mapping. Happily Ever After fans can also rejoice as the show is set to reportedly have similar animation styles.

At the moment, it seems we do not have an exact date for the show’s debut, but with 2021 coming to a close in a couple of months, it seems the show is just around the river bend!

Are you excited to see Cherish the Memories premiere at Hong Kong Disneyland?