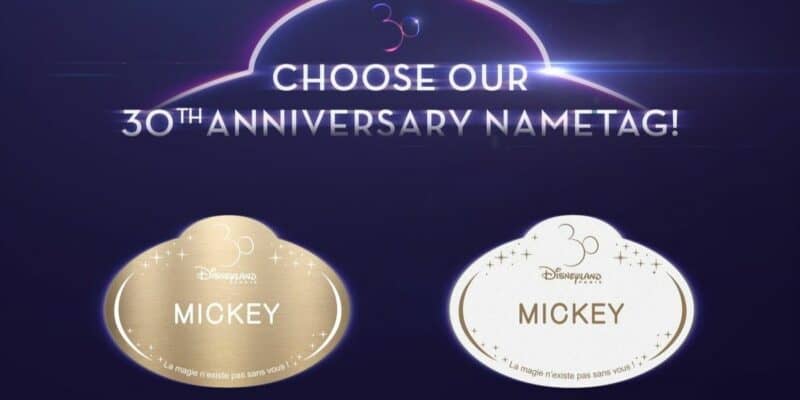 As we have seen from Walt Disney World’s 50th anniversary celebrations, there are many aspects of the parks that have changed to accommodate the celebrations.

At Magic Kingdom, we have seen the most change with Cinderella Castle completely transforming, with gold accents added throughout Main Street, U.S.A., and Fantasyland. Mickey Mouse and all of his pals have new EARidescent outfits for the celebration, and Cast Members got to join in on the fun as well.

Although they do not have all-new costumes, they do have new name tags, which add to the celebration’s color scheme. Now, Disneyland Paris is gearing up to begin its 30th anniversary on March 6, 2022, and it seems new name tags will be used there as well, but this time Cast Members have a say.

With a gold and white color scheme, Cast Members are currently voting on which look they like best! The options are between a gold base with white lettering and a white base with gold. Jonathan Rabeute (@JonathanRabeute) took to Twitter to share both options.

Starting today, #DisneylandParis Cast Members are voting to choose the name tag they will wear during our 30th Anniversary! What’s your favorite? #DisneyCastLife #DLPCast

Starting today, #DisneylandParis Cast Members are voting to choose the name tag they will wear during our 30th Anniversary! What's your favorite? #DisneyCastLife #DLPCast pic.twitter.com/cQpIpZRjU5

If I had to choose, I would probably go with team gold as it seems like a bigger change from the usual name tags, but we will need to wait and see which color takes home the crown!

With Avengers Campus in the works and Sleeping Beauty Castle finishing off its refurbishment for the anniversary, there will be lots to see and do at Disneyland Paris Resort for the 30th anniversary. There is also a promo video for the celebrations, which have us fluttering with magic already!

We surely will hear more news and offerings on the anniversary as it continues to approach. For now, it is great to see that Disney is making sure their Cast Members have a say in the celebrations, after all of the work they have done for the Park and trials and tribulations they went through with the pandemic causing Disneyland Paris to close multiple times.

Which name tag would you choose? Let us know in the comments below.