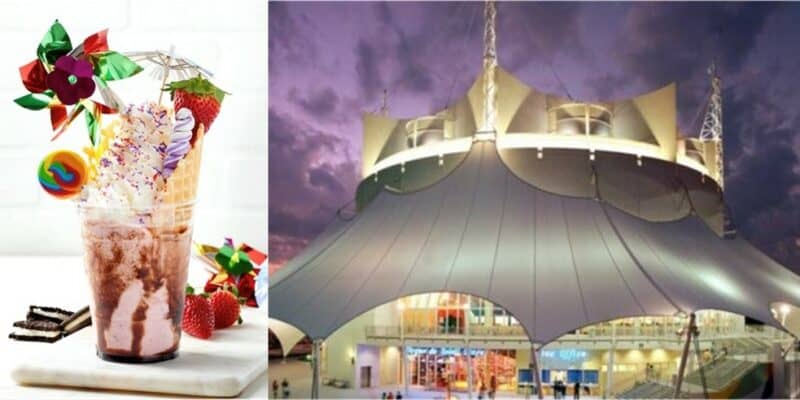 It is FINALLY happening! The West Side of Disney Springs is once again buzzing with excitement after 1,418 days of being oddly quiet. There is no better way to celebrate Disney and Cirque du Soleil’s newest show debut than with an extra special treat we can’t stop drooling over.

The iconic white tent theater located at Walt Disney World Resort’s Disney Springs is filling with theater fans eager to watch the first performances of the new “Drawn to Life” show. While the massive tent was once filled with Guests for Cirque du Soleil’s La Nouba, it has sat empty since the final performance of La Nouba’s 19-year run on December 31, 2017.

Now, Disney and Cirque du Soleil have teamed up for the very first time to create a unique performance for Guests. The tent opened to a sold-out audience for the grand premiere of “Drawn to Life” on November 18, 2021, as COVID-19 put a hold on the show’s debut long enough!

Disney Springs welcomes the return of the show with an irresistible treat by tweeting, “Celebrate the upcoming opening of “Drawn to Life” Presented by @Cirque and Disney with a special treat from Vivoli il Gelato! The “Cirque Du Shake” features a colorful array of strawberries, cookies & cream, chocolate sauce, and whipped cream in a waffle cone

How AMAZING is that?! If you’re interested in this unique treat, simply head on over to Vivoli il Gelato in The Landing portion of Disney Springs. Just be sure not to miss the big show, as Disney describes drawn to life with:

“Drawn to Life”, written and directed by Michel Laprise with Fabrice Becker as Director of Creation, is a live acrobatic journey telling the story of Julie, a determined girl who discovers an unexpected gift left by her Disney Animator father: an unfinished animation. As she dives into the inner world of animation guided by a surprising pencil, Julie embarks on an inspiring quest filled with her childhood Disney memories. Developed in partnership with Michael Jung, Executive Theatrical Development, Walt Disney Imagineering along with Walt Disney Animation Studios, the story is driven by 10 unique acrobatic acts alongside animation from beloved Disney films. In addition, the show features all-new animation created by Disney artists led by Animation Director Eric Goldberg, best known for characters such as the Genie in the Disney Animation classic “Aladdin.”

“Drawn to Life” is performed 5 nights a week (Tuesday – Saturday). For more information on tickets, dates, and pricing, visit cirquedusoleil.com/drawntolife.

Do you plan to make this flavorful ice cream treat part of your “Drawn to Life” plans?

Comments Off on IT’S BACK! Celebrate Cirque du Soleil’s Return With This Irresistible Treat