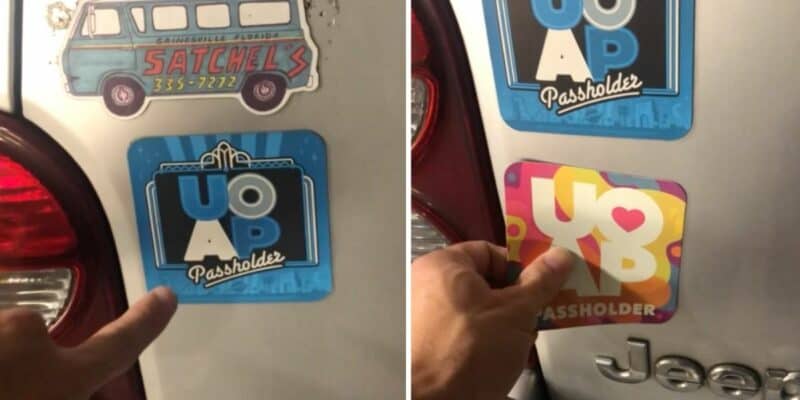 One fun way that a lot of Orlando theme park Annual Passholders share their pride for the parks is through magnets on their car. When you visit Orlando, it is not surprising to see Disney World Annual Pass and Universal Annual Pass magnets on the back of one’s car.

Of course, there are likely Guests all over the world that share their Annual Pass magnets, but in Orlando, there are a lot more locals who do this, as having an Annual Pass for the theme parks is almost essential! One Universal Annual Passholder decided that they were going to go above and beyond for those who are showing off their Universal pride.

Inside the Magic recently spoke to Omar Cardona, who loves to see others show off their Universal magnets. Omar is a Florida local who always leaves other Universal Passholders with a little gift when they have a magnet on their car. Cardona noted that whenever another parked vehicle has a UOAP magnet on the back, that they would remove one of theirs and place it on the car as a fun parting gift.

Below, you can see photos of Omar looking at a parked car. In a video shared with Inside the Magic, Omar stated, “I don’t know who these people are, but I think they are,” and then points to the UOAP magnet and finishes his sentence saying “awesome!”.

He then heads to his car and proceeds to remove one of his magnets, and says that he is going to “share a little love.”

He then places it next to the UOAP magnet on the car next to him.

Omar noted that he does not have too many magnets but likes to do this whenever he sees another Universal magnet on display, as not too many others in his town showcase theirs too often. Omar can create magic for Guests when they are not even at the Park, which makes the gesture he continues to do very special. Although Universal Team Members do a fantastic job creating memories for Guests, as we have discussed in previous stories, Guests have the same ability to enhance the day of others around them!

Big shout out to Omar for keeping the Universal feeling alive and well, even while we are not able to experience the theme park thrills.

What do you think of Omar’s Universal magnet mission? Let us know in the comments below!