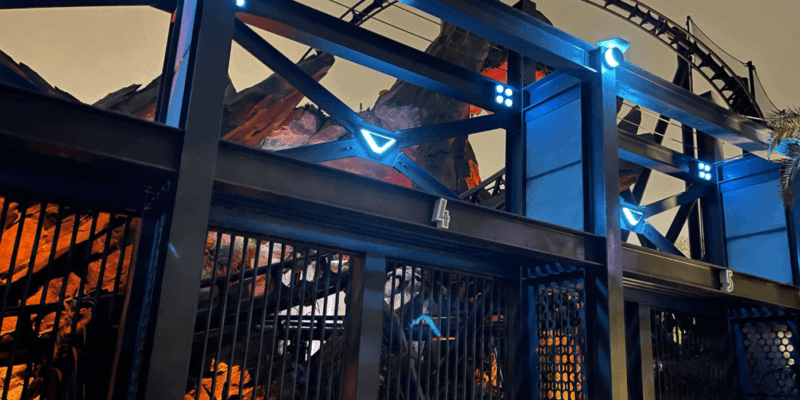 Universal’s newest coaster, Jurassic World VelociCoaster, at Islands of Adventure, has quickly become a fan-favorite attraction among Guests. The ride officially opened in June of this year, and although most Guests who watch the coaster pass by respect the track and riders, there have been instances of others tossing items into the track area.

We previously reported on a group of Guests who were reprimanded for tossing ice at the track at riders passed by. When Guests ride VelociCoaster, they must secure all loose articles in a locker before boarding the ride vehicle in order to ensure that nothing falls into the track area during their ride.

As you can imagine, Universal also prohibits Guests from tossing items in towards the coaster as this could endanger the riders who are moving at incredibly fast speeds. The coaster also has plexiglass around certain areas of the attraction to protect both Guests and riders.

Inside the Magic recently spoke with Bev Thomas, who saw a mother and son get into an argument. During the argument, the son’s glasses fell off and broke. It seems that in a fit of anger, the boy threw the broken glasses into the VelociCoaster track. Of course, behavior like this is incredibly dangerous, and with Universal Team Members in view, the Guest was caught immediately.

He was reprimanded and nearly removed from the Park. After the Team Members spoke with the Guest, he seemed to be incredibly embarrassed for his actions. Luckily, there was not a coaster passing through as he threw his glasses, or things could have ended up much worse.

Universal Team Members and security will always ensure that Guest’s at the Park are following the proper safety protocols and procedures. If you are planning on visiting Universal Orlando Resort, always be sure to follow their rules and regulations and respect the Team Members who are enforcing them.

If you choose not to do so, you may be removed from the Park or have further and more severe consequences. To read on the theme park’s policies, click here.