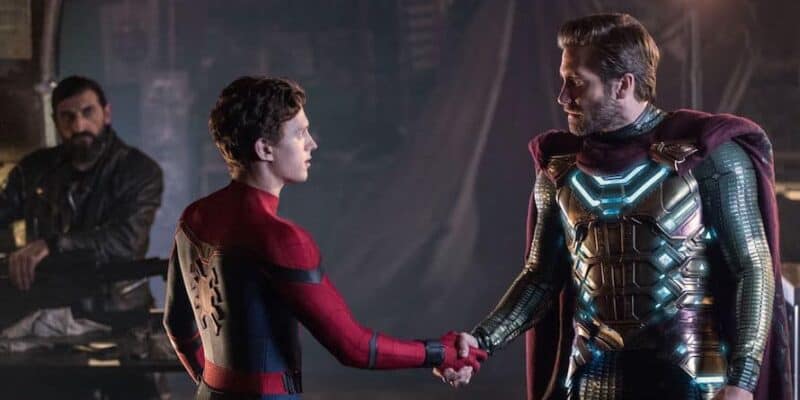 Spider-Man: Far From Home co-stars Jake Gyllenhaal and Tom Holland shared a moment of understanding and resilience on the set of the record-breaking film.

According to Screenrant, Tom Holland helped his co-star work through nerves and intense anxiety on the set of the second Spider-Man film, which broke numerous records.

Gyllenhaal stated on The Howard Stern Show that living up to the reputation of being a Marvel superhero (or, in his case, a supervillain) was extremely intense and caused him to become forgetful and absent-minded at points. This resulted in the star forgetting his lines on the first day of filming. Tom, however, was very helpful towards his coworker and helped him calm down to help alleviate the pressure he was feeling.

Here’s what Jake Gyllenhaal had to say:

“I was freaking out. It was a scene with [Samuel L.] Jackson, Tom … there were a number of actors in that scene. And I remember not being able to remember my lines. I was the wooden board. And they were like, ‘Whoa.’ And I went up to Tom Holland and was like, ‘Dude, help me out.’ He’s like, ‘It’s all good, man. Just relax.’ It was like he was me in so many situations. And I finally did. I just put a lot of pressure on [myself] because I love that world.”

Watch the interview below:

Jake Gyllenhaal is known for the versatility of his roles, being able to pretty much embody any character that he is cast to portray. However, this is proof that even the most talented people still get stage fright! As of right now, it is not fully certain if Mysterio will have a part in Spider-Man: No Way Home, but this does not mean that the actor could not return at a later date.

However, Tom Holland will not be returning as Spider-Man due to his contract coming to an end. Mysterio is a foe of Spider-Man and is credited as not having any actual superpowers, however, he is an extremely talented illusionist, athlete, and fighter. His witty intelligence being mixed with his illusion skills made him a threat in a very psychological way.

If Mysterio returns, will you be heading to the theaters to see his next illusions and escapades? Be sure to let us know in the comments!