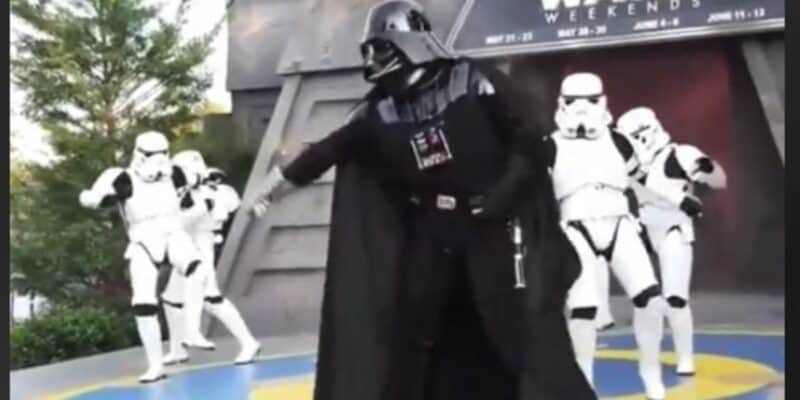 If there is one thing that makes Walt Disney World stand out from other theme parks, it’s the character experiences. From meet and greets to characters popping up throughout the theme park to parades and cavalcades, there are so many different experiences that Guests can have with Disney characters.

One of the most famous character experiences that has been making its rounds for years now is when Stormtroopers and Darth Vader put on an epic routine to Michael Jackson’s “Beat It” at Disney’s Hollywood Studios.

As we mentioned earlier, though this video is from a few years ago and has made its rounds on many occasions, it is once again getting attention from TikTok, and so we wanted to share it with all of you in case you had not yet seen this incredible routine.

The video starts with the Stormtroopers on stage in their formation when suddenly, Guests hear the iconic sound of Michael Jackson come over the loudspeakers. The Stormtroopers then begin a shocking dance routine, which is followed by Darth Vader joining the stage and also dancing to “Beat It” — something you certainly won’t see every day.

What makes this video so great is that no one expected Darth Vader or the Stormtroopers to break out their dance moves and put on a routine to Michael Jackson, but we are so glad they did because it is hilarious, and this video will never get old!

Have you ever seen this video? What is your favorite character interaction from visiting the Disney Parks? Let us know in the comments below.

Do you want to visit Walt Disney World on your next vacation? If so, make sure you start planning today! Click here to get started.

Comments Off on Stormtroopers, Darth Vader Dance to Michael Jackson in Epic Routine