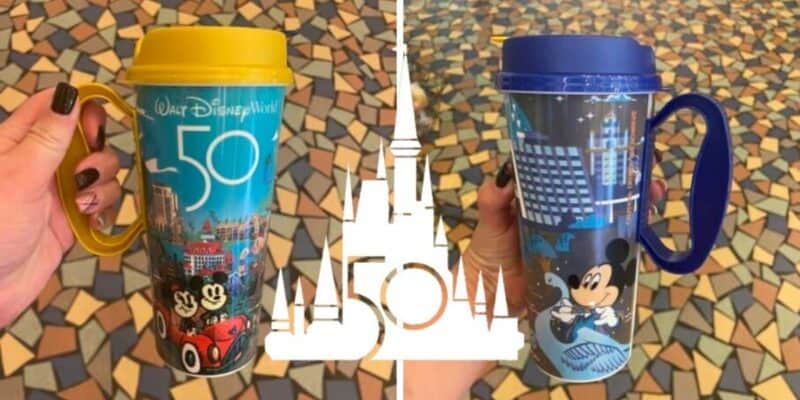 At Disney’s Pop Century, we spotted the new refillable mug designs, both of which you can see below.

As far as the second design goes, we can see a variety of characters and icons from around Walt Disney World including Spaceship Earth, Disney’s Contemporary Resort, Stitch at Disney’s Polynesian Resort, Tinker Bell, and more — all sporting the new EARidescent color scheme.

The best part is that both of these designs come in the option of either a blue lid and handle or a gold one — making for four different choices in total.

Walt Disney World mugs can be refilled at any Resort refillable mug station. A range of Coca-Cola products are readily available as well as hot coffee, iced tea, and hot chocolate. There is also a section for water at the stations.

These brand new Disney World 50th Resort Refillable Mugs have been spotted at Disney’s Polynesian Resort, Disney’s Pop Century Resort, and Disney’s Art of Animation, but we are sure they are available at any location that typically sells Resort refillable mugs. We are not sure how long these mugs will be available for so if you want to get your hands on one of these, we suggest snagging one in the near future!

Will you be purchasing one of these refillable mugs? Let us know in the comments below.