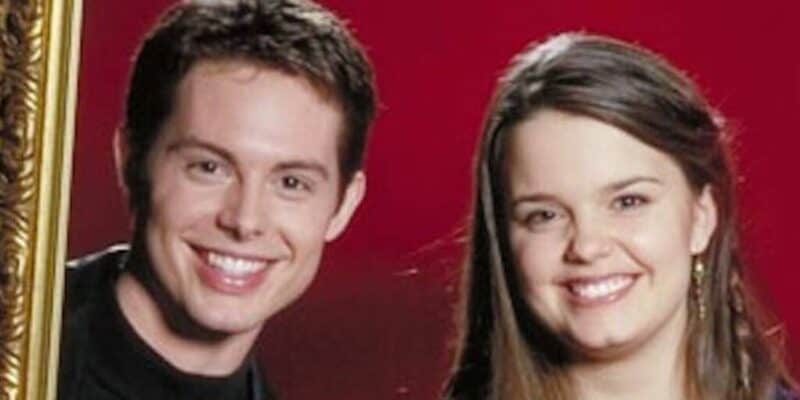 Calling all Halloweentown (1998) fans! Kimberly J. Brown and Daniel Kountz have found themselves caught in a love spell that may or may not have been made by Grandma Aggie Cromwell. The two played characters Marnie Piper (Brown) and rival Kal (Kountz) in Halloweentown II: Kalabar’s Revenge (2001).

Grandmother Aggie (Debbie Reynolds) sweeps granddaughters Marnie and Sophie off the Halloweentown to investigate a series of strange occurrences. When they arrive, the vibrant community seems to have lost its magic, and its once-colorful citizens have become gray — literally — and boring. But why? It isn’t long before Aggie discovers that her spell book has been stolen, and the trio sets out to find it. They discover that an angry warlock plans to permanently turn every human into whatever costume they are wearing at midnight on Halloween and has taken the book so Aggie can’t use it to reverse his spell. It’s a race against time, as Marnie must use her skills to defeat the young warlock threatening to change Halloweentown for eternity.

Sparks were flying as soon as the pair met on set of Halloweentown II: Kalabar’s Revenge. Going on to mention their first impressions, the couple said:

“She was super nice and professional and very welcoming. She’s a nice girl. So it wasn’t hard to like her.”  -Kountz

“I just remember thinking he was just the nicest guy. And talented too, of course, but he was very nice, which is more important.” – Brown

20 years after the second Halloweentown movie premiered, the magical couple revealed just how they fell in love and Agatha Cromwell (the late Debbie Reynolds) was not the culprit. The two posted a photo together back in 2018 on Instagram announcing to fans that they were indeed an item.

Throwing it back to our most recent trip to @disneyland early in the year. I loved how they had the castle lit up that day. You can see the video of our adventure on my #youtubechannel *link in bio* While you’re there, you may wanna subscribe because there’s a new video coming out next week! @danielkountz

The pair did not start spending more time together until 2016 when they met for a casual dinner to reconnect and reminisce on the good old days. After that dinner was when things started to fall perfectly into place for the couple, no magic needed.

Reminiscing on the reunion, Kountz told E! News that he was surprised to see Kimberly after so long, going on to say:

“I know it took me by surprise…I hadn’t seen her in years and I’m waiting I’m sitting at the bar waiting and she comes walking in and I was like, ‘Well hello there it’s been a while, hi!’ So it was pretty much just right away…”

Brown continued to add in her reaction saying:

“It’s like, I know you but I don’t know you know you, so let’s talk about life and stuff. Let’s figure each other out.'”

News of the official couple sent fans into a frenzy, some even went as far as dressing up as Marnie and Kal for Halloween. Brown and Kountz adore the support they receive from their fans on a regular basis and said in an interview with E! News:

“It’s been pretty fun getting to watch the fans’ reactions to it over the years… It cracks us up.”

Love is an adventure. It’s exhilirating, vulnerable, scary, and amazing. It’s letting someone in to see all of your scars & triumphs and embracing theirs as well. We can post all the ideal sparkly photos in the world but at the end of the day being loved for who you truly are is the biggest, simplest gift. I’m so grateful for all of that love that I’m surrounded with by all of my friends and family that I love.

These days, the couple spend their time together casually updating doting fans on Instagram and enjoying life to the fullest. Brown posted a picture of the two riding bicycles around the LA River in California.

Thanks to Halloweentown bringing them together, Kimberly and Dan seem to be living happily ever after as their relationship continues to flourish and be filled with plenty of magic. If you are feeling nostalgic after all of this talk about Marnie and Kal, you can find all of the Halloweentown movies on Disney+.

Comments Off on ‘Halloweentown’ Stars Were Enemies in the Film But Are a Real-Life Couple!