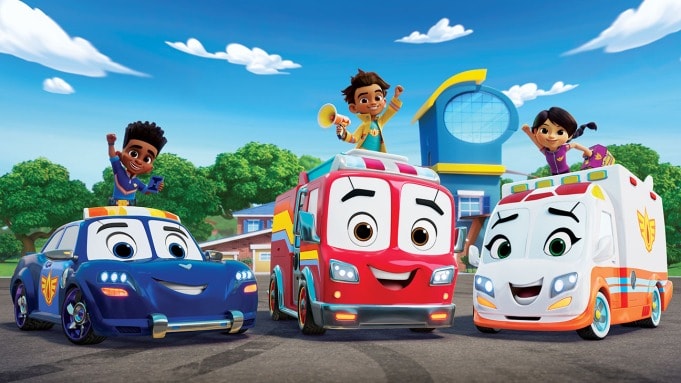 Calling all Disney Junior fans! While we simply can’t get enough Disney Junior favorites like Bluey, Doc McStuffins, Sofia the First, Fancy Nancy, and more – it looks like a new show is moving in that will likely be a priority when it comes to the kids’ screen time. We know our kids are excited to learn that a new series is headed to the massive Walt Disney Television network. What’s even better is that this new Disney Junior show will feature first responders!

In an exclusive shared by The Hollywood Reporter, “Disney Junior has greenlighted an animated comedy-adventure about first responders that hails from Craig Gerber, who also created and exec produced the network’s hit series Sofia the First and its spinoff, Elena of Avalor. Like those two shows, Firebirds, set to premiere next year on Disney Junior and Disney Plus, is filled with music. The show follows team of young kids who are the children of first responders, along with their talking-vehicle sidekicks, as they embark on adventures together and learn what it truly means to be a hero.”

To provide a little insight to the new show, “Firebuds is set in a fantastical world where talking vehicles live, work and play with the humans who drive them. It centers on a boy and his firetruck as they team up with their first responder friends to help others in their community. The show aims to emphasize the importance of teamwork and helping your fellow citizens. Each episode is comprised of two 11 minute stories and features at least one new original song.”

Gerber is quoted saying, “Firebuds is about the spirit of community service and thinking about others before yourself.” “Just like our young heroes are trying to follow in their parents’ ‘tire treads,’ we are hoping to inspire children to embrace volunteerism and helping others. It is personally a very meaningful show for me and the perfect way to launch this next chapter of my career with Disney.”

Even though The Hollywood Reporter notes the new series title as “Firebirds” in one spot and “Firebuds” in other parts of their exclusive, we are assuming “Firebuds” is correct as that title is used most frequently.

We can suspect Firebuds to launch in 2022 on Disney Junior and Disney+, but the debut month and/or dates have yet to be released. We’ll keep you posted as we learn more about the incoming Disney Junior series featuring first responders.

Do you think your kids will enjoy Firebuds based on the new show details?