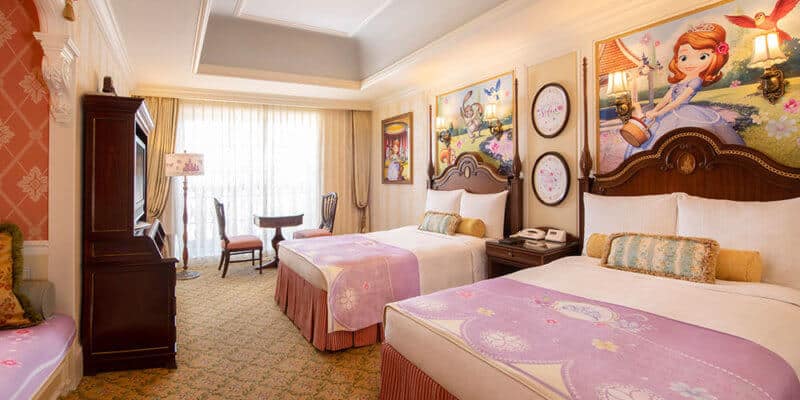 Tokyo Disney Resort just announced that new “Sofia the First”-themed hotel rooms are coming soon, and you’ll definitely want to book a trip fast if you want to experience this.

According to the official website, the “Sofia the First” hotel rooms will be decorated with linens and elements featuring Sofia and her pals Clover, Robin, and Mia. A special souvenir set including an activity booklet, cotton blanket, and shoulder bag will also be available for guests of these hotel rooms. Tokyo Disney Resort is known for their impeccably themed parks and resort hotel rooms, so we’re sure you won’t be disappointed if you choose to stay in a character-inspired room, especially if your children are a fan of the film or character the room is inspired by.

Additionally, guests staying in “Sofia the First” rooms can also order special themed room service with a meal that includes purple sweet potato soup, steak pie with grilled vegetables, strawberry mousse with yogurt, and a blueberry cream chiffon cake. Fans of Tokyo Disney Resort say that the food and snacks offered throughout the theme parks and hotels are unlike those of any other Disney property, so we believe this is probably worth a try. Plus, where else can you and your family try a meal that is entirely inspired by your favorite Disney character?

Reservations open on February 5 at 14:00 Japan time. You can make reservations by visiting the official Tokyo Disney Hotels website here. You can read more details about the “Sofia the First” hotel rooms here.

Take a look at the hotel rooms and room service details for the “Sofia the First” hotel rooms below!

Have you ever visited Tokyo Disney Resort? Share your experiences with us by commenting below!