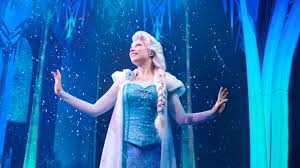 It has been speculated that the Frozen: A Musical Invitation show will be returning to Disneyland Paris in the near future.

Recently, Guests have noticed at the park and on the official app that the Frozen selfie spot has been removed and Animation Celebration has been closed for the next two days.

Although the selfie spot has been removed, Guests are still able to pose for a picture with Olaf and give nice warm air hugs.

With the surrounding area of Frozen: A Musical Invitation seemingly being cleared out, it does seem possible that the musical experience will be making a return although, it has not yet confirmed by Disney at this time.

In the musical we find our favorite Frozen (2013) characters preparing to open up Arendelle castle for the very first time, and Guests will follow along with their preparations.

Frozen: A Musical Invitation is described by Disney as

As Queen Elsa prepares for her famous ice palace to open to every for the first time, Princess Anna teaches guests the magic movies for celebrating her sister’s powers inside Kristoff’s barn, where she’s joined by none other than Kristoff and Sven! Guests will even hear a rendition of “Reindeers Are Better Than People” live from Kristoff himself.

Then comes the big moment when Anna invites everyone to enter a new space opening directly onto a room in Elsa’s palace. When she sings the show-stopping “Let It Go,” “Frozen” fans are invited to perform their new moves in support of Elsa, followed by a live performance of “Love is an Open Door.”

Things continue to look promising for Disneyland Paris as more attractions and experiences begin to open back up following the theme park closures amid the COVID-19 pandemic.

Do you think Frozen: A Musical Invitation will be returning to Disneyland Paris? Let us know in the comments!