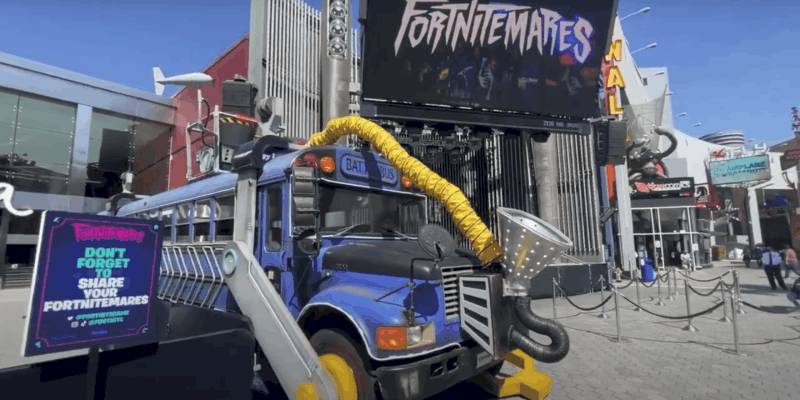 Fans of the video game phenomenon Fortnite were pleased to find out that battle buses inspired by the game have appeared at Universal Studios Hollywood for the Halloween season.

The Fortnite Battle Buses are a part of the Fortnitemares event taking place on the video game itself and at Universal Studios Hollywood for the remainder of the month.

Guests will be able to not only experience the buses, but interact (covid safely, of course) with cosplay characters of the video game franchise as well. Fornite is no stranger to cross collaborations, back in 2018 we reported on how Fortnite users could play as Thanos! The brought-to-life Fortnite content can be found on Universal CityWalk, which is located before the towering archway entry into the actual theme park.

In typical theme park/pop culture collaboration fashion, Easter eggs from the video game can be tied directly into things that guests will see at the Fortnitemares event. When certain game skins are released throughout the month, guests will be able to experience them in person as well. It is a way for the game to not only have a fandom event but advertise new updates for the games, which always excites eager fans.

Photos of the battle buses were posted by Twitter user: @ThemeSnark, they are posted below.

“…this a Fortnite thing?”

According to Comicbook.com, fans who can not make it to the park for the event do not have to worry due to many great things that will happen inside the game during the month-long event.

Of course, Fortnite fans that can’t make the trip to Universal Studios Hollywood can always stick to the Halloween event in the game. Fortnitemares has proven to be a very fun event over the years, and it looks like 2021 will be no exception. This month, there’s plenty for fans to enjoy, including content based on the Universal Monsters, and a rumored tie-in with The Walking Dead. Fans can also expect to see the return of a limited-time mode, which leakers suspect could be Horde Rush.

Fortnite is available on most platforms, including the Nintendo Switch and PC gaming systems. As we previously reported, Fortnite users were able to receive Disney+ for two months free. However, that promotion is not running at this time, but that does not mean it couldn’t return in the future.

Will you be stopping by Universal Studios Hollywood to check out the video game-inspired event for the Halloween season? Be sure to let us know in the comments!