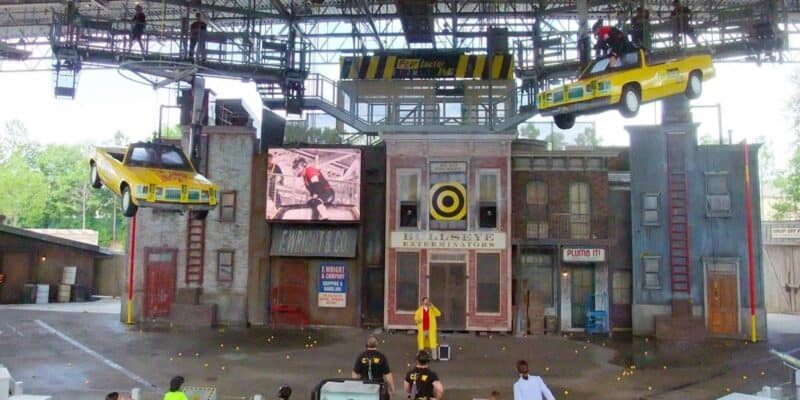 Twenty years ago, a new show launched on NBC where contestants laid down and let snakes crawl over them, ate live bugs, leaped off of towers, and participated in a ton of dangerous and straight-up gross challenges in order to try to win $50,000. The show was called Fear Factor, and it ran on NBC for five years, took a five-year hiatus, came back for one season before it was taken off the air, but was picked up by MTV where it ran for several more seasons.

The show was so popular that a live stage show version of it was launched at both Universal Studios Hollywood and Universal Orlando Resort in 2005 called Fear Factor LIVE. The stage show ran for three years at Universal Hollywood before it was replaced by Creature from the Black Lagoon: The Musical — which lasted only about a year and is now the Special Effects Stage.

While Fear Factor LIVE only ran for a few years at Universal Studios Hollywood, the show saw much more success in Florida. For about five years, the show only operated on a seasonal basis, but in 2010, it began to run year-round — only closing every Halloween in order to be turned into a Halloween Horror Nights event.

While Fear Factor LIVE initially saw a lot of success and popularity, it seems that that popularity has dwindled, and Universal Orlando has now confirmed that the show will not be returning once Halloween Horror Nights ends. The stage area is currently housing Halloween Nightmare Fuel as part of the yearly, terrifying Halloween event hosted at the Florida theme park.

The page for more information on Fear Factor LIVE has also been taken down and Guests trying to search for information are informed by Optimus Prime that the page has “rolled out”.

Rumors had been swirling that the show would not be returning when it did not open when Universal Studios reopened after its COVID closure in summer 2020. Some thought the show could not operate due to COVID restrictions, but those thoughts dissipated once the theme park started increasing capacity, mask mandates and social distancing requirements were eliminated, and everything else at the Park continued to open.

While Universal Orlando has confirmed the closure of Fear Factor LIVE, it has not confirmed what will be coming to the stage area once Halloween Horror Nights ends. Inside the Magic will keep readers updated once Universal confirms the show’s replacement.

Are you sad to see Fear Factor LIVE ending? Or are you excited to see something new come to the Park? Let us know in the comments!