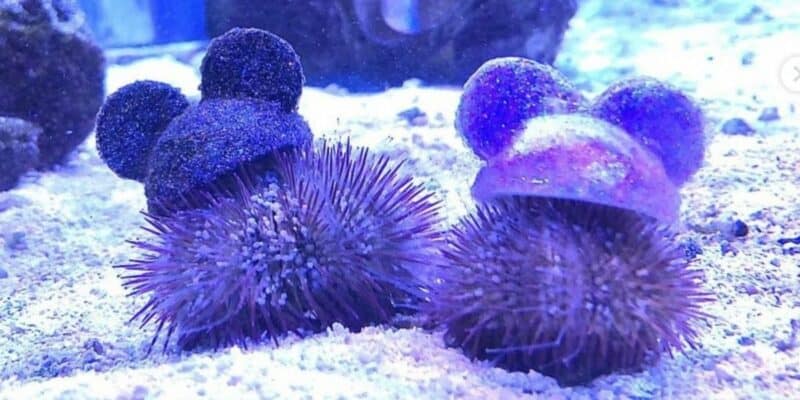 On October 1, Disney kicked off its epic 50th anniversary celebration and all four theme parks were decorated to the nines, with crowds descending on the Parks to enjoy the incredible food, rides, and merchandise. Walt Disney World’s 5oth anniversary is one that no Disney fan should miss, even if they can’t technically leave their tank.

Dr. Mark Penning, Vice President: Animals, Science and Environment, shared some adorable pictures of the marine life at Disney getting in on the anniversary fun. According to Dr. Penning, aquarists — those who maintain the marine life habitats and interact with the animals — designed and printed water-safe, 3D hats and put them in the tanks of some sea urchins. Urchins love to pick things up to cover themselves, and the end result is absolutely adorable and teeming with Disney magic.

“Hats off” to our aquarists at The Seas with Nemo & Friends, who created 3D-printed Mickey ears to celebrate the 50th anniversary of Walt Disney World Resort!

Sea urchins naturally pick up objects for decoration or camouflage, and once the hats were in their environment, they decided to put them on.

Ranger the epaulette shark got in on the fun, too!

While the sea urchins were adorable enough for most, an epaulette shark named Ranger didn’t want to be left out of the action.

It’s an event five decades in the making!

Walt Disney World’s 50th anniversary celebration began on October 1 and will run for 18 months, wrapping up in May 2023.

Which animal is your favorite to see in some 50th anniversary mouse ears? Let us know in the comments!