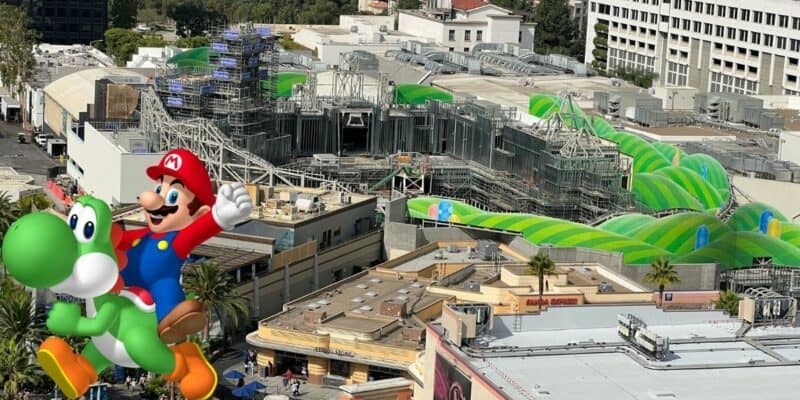 Universal began working on Super Nintendo World at its Hollywood Park before it confirmed in August 2020 — while the theme park was shut down — that the new area would be coming in the future. Well, Super Nintendo World at Universal Studios Hollywood still does not have an opening date, but construction crews seem to be moving at breakneck speed in order to open the new land sooner rather than later.

An Inside the Magic Reporter recently visited Universal Hollywood and was able to see significant progress being made on Bowser’s Castle, which looks like it will take up a large portion of Super Nintendo World.

Race your way to victory! Iconic Mario Kart courses have been brought to life with cutting-edge technology. Challenge enemies with shells! Aim for the finish line with Mario and Peach!

The world’s first interactive Mario Kart theme park ride will leave you with a rush of adrenaline!

Universal Studios Hollywood does not have a ton of room to bring in new lands and areas, so the addition of Super Nintendo World is particularly exciting. The last addition to the theme park was almost 6 years ago when the Wizarding World of Harry Potter was brought to Southern California.

Are you excited to see progress being made on Super Nintendo World? Let us know in the comments!

CLICK HERE to book your Universal Resort vacation with our friends at Academy Travel – an EarMarked Diamond travel agency that can provide you with a free quote today!