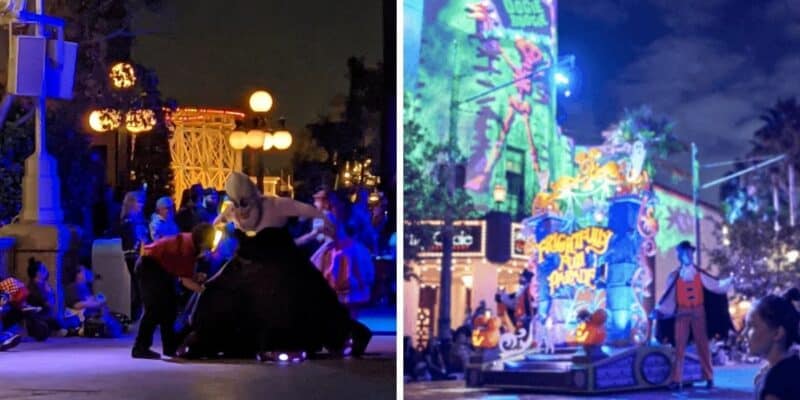 During a recent visit to the Oogie Boogie Bash at the Disneyland Resort, we noticed Ursula kept having with her tentacles during both performances of the Frightfully Fun Parade.

Related:Is the Oogie Boogie Bash Dessert Party Worth the Price?

On a recent visit to the Oogie Boogie Bash, I was able to watch both parade performances of the Frightfully Fun Parade. Both times I watched the parade, I witnessed Ursula struggling with her tentacles. Thankfully there was always a human to help the sea witch and keep the parade moving!

It looked as if Ursula kept getting stuck on her tentacles, and when this would happen she motioned for assistance without being distracting to the rest of the parade. Each time this occurred she only stopped momentarily. This small hiccup happened multiple times during the stretch of the parade route that was visible to me during both performances of the Frightfully Fun Parade.

I was glad to see that Ursula was able to perform in the parade despite her tentacles getting tangled on land! Her performance was amazing, as she terrorized the parade route while clutching the contract for Ariel’s voice in her hands. Ursula is of course the classic Disney Villain from Disney’s The Little Mermaid.

The Frightfully Fun Parade is a fantastic Halloween parade that runs twice a night during the Oogie Boogie Bash. The parade features some of our favorite characters, including Jack and Sally, Disney Villains, and even the Headless Horseman.

Here is how Disney describes the Frightfully Fun Parade:

This Halloween, the Guest-favorite Frightfully Fun Parade takes to the streets of Disney California Adventure Park during Oogie Boogie Bash.

Could that be skittish schoolmaster Ichabod Crane tiptoeing down the street? The eerie Headless Horseman of Sleepy Hollow carries a flickering jack-o-lantern in his gloved hand, signaling the end of the pre-parade and the beginning of something spectacular.

Mickey Mouse and Minnie Mouse, dressed in colorful Halloween costumes, lead the way in this spectacle of spooky spirits, all in fun and not-so-scary.

From Tim Burton’s The Nightmare Before Christmas, Jack Skellington, the Pumpkin King, brings greetings from Halloween Town, as residents arrive to celebrate their favorite time of year.

It wouldn’t be a Halloween parade without a gathering of ghosts, when the iconic Haunted Mansion attraction comes to “after-life,” with swirling ballroom dancers, ominous gravediggers and a trio of hitchhiking ghosts.

Inspired by Disney’s The Princess and the Frog, Dr. Facilier calls on mystical powers, summoning his Shadow Men from the bayou to loom large over his strange and twisted parlor.

This parade takes on a life of its own as mischievous Disney Villains appear out of the darkness, ready to stir up more trouble. Before it’s all done, a dungeon-like lair takes over the parade route, along with a fierce dragon and a wicked gathering of villainy, including Cruella and more.

The ever-curious and whimsical Cheshire Cat brings up the rear, smiling at all the magical mayhem.

Related: A Guide to the Holidays at Disneyland 2021

Let us know if you noticed this hiccup happening to Ursula when you watched the Frightfully Fun Parade in the comments.

Want to book a vacation to the Disneyland Resort? We can help, click here for more information.

Comments Off on Poor Unfortunate Soul, Ursula Struggles During Parade