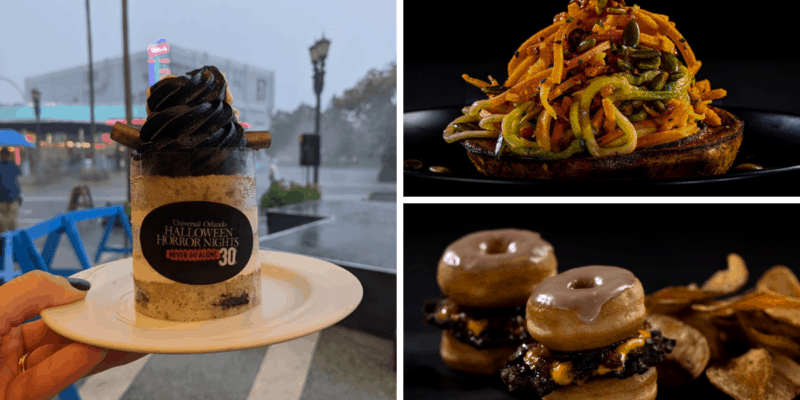 Here is a guide to some of the amazing food at Universal this Halloween.

Universal was kind enough to invite some of our team here at Inside the Magic out to Halloween Horror Nights. During our visit, I was able to taste and try some of the various food offerings for the event. I am going to break down my favorite food items, and the other treats you can find during the Halloween season at Universal Studios Florida.

Here are some of the foods that I tried that were amazing. Starting off with Pumpkin Guts, which is themed after an original Haunted House that Universal created for Halloween Horror Nights 30 called, Wicked Growth: Realm of the Pumpkin.

Here is how Universal describes the Pumpkin Guts dish: Sautéed zucchini and butternut squash noodles with hazelnut “brown butter,” sage, parsley, and toasted hazelnuts and pumpkin seeds served out of a squash ring. This dish is vegan-friendly and packs a big punch of flavor. Contrary to other typical theme park foods, this is a fairly healthy option!

The by the icon of the event, Jack the Clown, there is an incredible over-the-top doughnut dish you have to try! The Jack’d Donut Slider is sweet and savory all at the same time. With black angus beef patty topped with bacon jam and American cheese on bourbon-glazed donuts, there is so much to like about these little sliders with big flavor.

Let’s move on to the best part of a meal, dessert! There are a ton of fun desserts that you grab around the park, or inside of the Halloween Horror Nights Tribute Store. The Tribue Store is open during the day so you can grab a treat even if you do not have a ticket for Halloween Horror Nights in the evening. Here are some of the desserts you can purchase:

While the Frankenstein cupcake may turn your mouth black and green, it is truly delicious and makes for a really fun photo.

You can explore the full menu of Halloween food at Universal here. There is so much food to try that you will likely want to come back multiple times to taste everything. Universal has previously had tasting lanyards for other food events, and as Halloween Horror Nights continues to ramp up its food offerings year after year, perhaps that is something we could see at HHN in the future.

What food are you looking forward to trying at Universal Studios Florida this Halloween? Let us know in the comments!