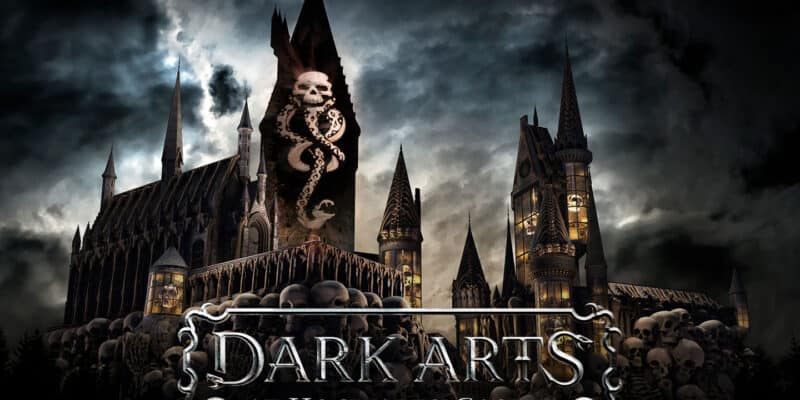 Attention Death Eaters: pick up your wands and head to Universal! Universal has confirmed that the Dark Arts at Hogwarts Castle nighttime show will return for the Halloween season at Islands of Adventure! Here are the details including when the show will debut, and how you can view the show.

Typically you can watch a spectacular nighttime projection show called Nighttime Lights at Hogwarts Castle after the sun goes down. For the Halloween season however Universal offers a special Dark Arts show to commemorate the chilling season!

The Dark Arts at Hogwarts Castle will begin on September 18 and run through the fall season. You can expect to see plenty of dark magic and even an appearance by He-Who-Must-Not-Be-Named, on the Hogwarts Castle. If you are a Harry Potter fan who is in Slytherin House or have always wanted to be a Death Eater, now is your time to visit Hogsmeade at Islands of Adventure.

Here are the frightfully fun details of the Dark Arts at Hogwarts Castle show from Universal:

The darker side of the Wizarding World will once again return to Universal Orlando Resort this fall, running nightly beginning Saturday, September 18 in The Wizarding World of Harry Potter – Hogsmeade. These breathtaking experiences use state-of-the-art technology, like projection mapping, special effects and lighting, to bring iconic moments and unspeakable creatures from the Harry Potter films to life.

As darkness falls in Hogsmeade, the all-consuming Dark Arts will be unleashed as ominous green light and fog floods the village. Death Eaters – devoted followers of Lord Voldemort – will appear and lurk amongst guests with complete disregard of wizarding laws.

Soon after, guests will witness sinister creatures and villains – such as Dementors, Aragog, Mountain Trolls, Thestrals and more – cloak Hogwarts castle in an awe-inspiring display of light, music and special effects. Guests will be asked to summon their inner strength and bravely face the visage of the powerful Dark wizard, Lord Voldemort. Then, find a moment of hope hidden in the darkness as the Patronus spell – one of the most famous, difficult and powerful defense of the Dark Arts charms in the Wizarding World – is cast.

Personally, I really enjoy the Dark Arts at Hogwarts Castle show and I am very happy to see it return to Islands of Adventure. Grab a hot Butterbeer and your wand, and enjoy the show starting on September 18!

Are you looking forward to the return of the Dark Arts at Hogwarts Castle show? Let us know in the comments!

Want to book a Universal Orlando Resort vacation to explore the Wizarding World of Harry Potter? We can help, click here for more information.