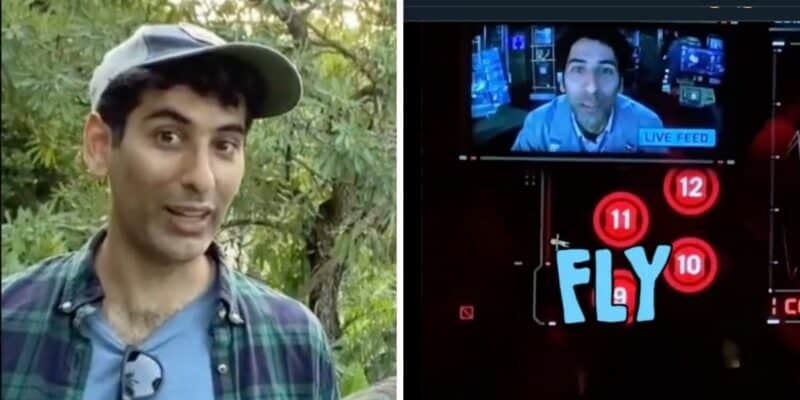 Dr. Stevens always welcomes us in the Avatar Flight of Passage preshow in Disney Animal Kingdom‘s Pandora.  His chill and sometimes unkempt demeanor have become part of the Disney character anthology, especially known for his “And uh… fly!” quote.

Just this week, Dr. Stevens himself (Daniel Danipour) traipsed into Pandora for the first time in forever and experienced his own character’s preshow!

Avatar Flight of Passage is a virtual reality ride that allows Walt Disney World Guests to fly their very own banshee (or Ikran) through the incredible world of Pandora.

But before you ride, you must learn the local history and anthropology of the land with Jaclyn “Jackie” Ogden, a doctor working for Pandora Conservation Initiative in Valley of Mo’ara and creator of the Mountain Banshee Project, and lastly go through a safety briefing with Dr. Stevens.

The (now) legendary preshow video for this top tier attraction features Dr. Stevens (played by David Danipour), who has become famous in the Disney fan community for his “…and, uh…fly” line during the video. And even though this land (and attraction) opened in 2017, Danipour had not yet had the chance to visit and ride for himself… until now!

Stealthily filming himself in the preshow room, Danipour doesn’t tip off any Guests that “Dr. Stevens” is, in fact, in the room! But after experiencing the ride, Danipour had critiques to share. While the ride was “incredible,” he found the preshow, “uh… fine.” Considering his allusion to his line, this commentary is fantastic. Below, you can see his visit to the preshow room behind many other Disney Guests.

Went to Orlando for the very first time last week and was able to experience (stealthily) Avatar Flight of Passage for the very time as well. Incredible ride – preshow is uh…fine 😉 Thanks @lol4MarkDaniel. #flightofpassage #waltdisneyworld #DisneyWorld #disney

Once Danipour got out onto the sidewalks of Pandora, it was secret spotting time! Mark Daniel, Emmy Winning Warm-Up Host, Emcee, Comedian, Voice Over Artist, YouTube Creator & LIVE Personality for Disney, found David Danipour walking around in Disney’s Animal Kingdom’s Pandora and stopped over to meet up.

After Danipour brushes several micro-parasites from Mark’s shoulder with doctoral expertise, Mark Daniel reveals via Socrates style questioning that this Pandoran visitor is none other than Dr. Stevens from the Flight of Passage preshow!

Mark Daniel shared the entire video from his TikTok (@lolmarkdaniel) on his Twitter channel (same handle) and it’s quite a joy to watch.

Fun Mark Daniel Nerd Fact of the Day! Thank you @ADownpour for being an awesome person & flight partner. Plus, Your Dr. Stevens has been turned into a TikTok sticker! Congratulations

Fun Mark Daniel Nerd Fact of the Day! Thank you @ADownpour for being an awesome person & flight partner. Plus, Your Dr. Stevens has been turned into a TikTok sticker! Congratulations 🥳🤣 pic.twitter.com/NPGertvi9h

If you want to know more about Danipour’s creation of Dr. Stevens or the scripting process for his now-famous line, Danipour participated in an “Ask Me Anything” on Reddit.

Disney fan and Reddit user Accurate-Profession asked the question that was probably on everyone’s mind when Danipour started his online Q&A session, “Your line ‘and uh, fly’ has become quite a meme in the Disney fan community. Was it scripted exactly as that? Were you given direction on how to read that line?”

Danipour replied, “No, that line was not scripted that way. I just sort of discovered it on the day. Imagineering folks are very creative people so they would give me some creative freedom’s [sic] as well. I do remember when we discovered that line, they did like it.”

Are you a big fan of this Flight of Passage preshow line? Leave us a comment with your favorite parts of this Animal Kingdom attraction!