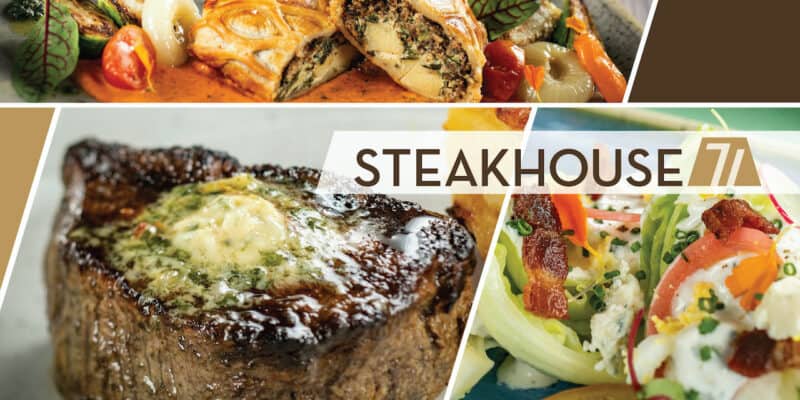 While not a ton of details were available on Steakhouse 71, Disney Parks Blog has now shared a first look at the menus for the new Contemporary Resort steakhouse. Steakhouse 71 will be open for breakfast, lunch, and dinner, and has delicious menus for all three.

Steakhouse 71, which gets its name from the year the resort opened, has a sleek yet comfortable décor with fun design elements from the ‘70s and hints of our Florida heritage with subtle sightings of the beloved Orange Bird and citrus groves.

Check out the lunch and dinner menus below.

As if the lunch and dinner menus are not delectable enough, Steakhouse 71 will also have a dessert menu featuring a number of delicious treats, from chocolate cake to apple tart tatin. There are also specialty cocktails and hot beverages.

Another great aspect about Steakhouse 71 is that it will not only be open to Guests with reservations. Steakhouse 71 will also have a lounge where Guests can come on a first-come-first-serve basis and snack on a number of yummy bites like loaded mac and cheese and PB & J chicken wings.

Steakhouse 71 will officially open on October 1 — the day Disney World begins its massive 50th Anniversary celebration — and will begin taking reservations on September 16.

Will you be making reservations to dine at Steakhouse 71 during your Disney World vacation? Let us know in the comments!

CLICK HERE to book your Disney World vacation with our friends at Academy Travel – an EarMarked Diamond travel agency that can provide you with a free quote today!

Comments Off on Menus Revealed For Disney’s New Steakhouse 71!