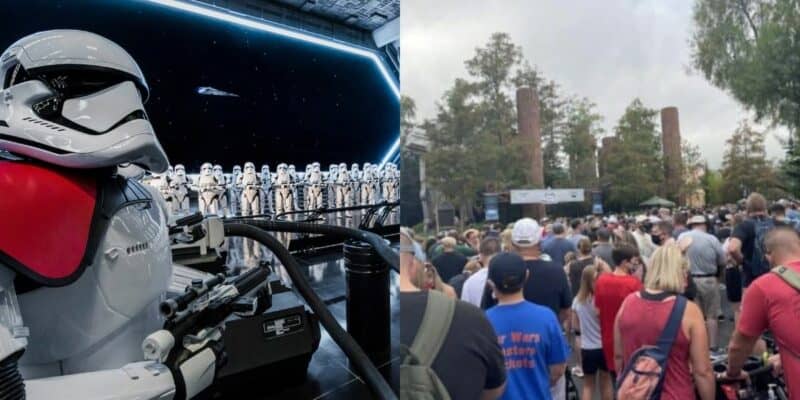 Last week saw Disney Parks announce that the fan-favorite attraction, Star Wars: Rise of the Resistance will, for the first time ever, pause its virtual queue system and instead use a traditional standby line.

Today, Star Wars: Galaxy’s Edge at Disney’s Hollywood Studios drew huge crowds as the need to obtain a boarding pass became obsolete (for the time being) and the standby line debuted. With wait times soaring quicker than the Millennium Falcon entering hyperspace, Disney fans have spoken out about whether the decision to alter the queue system was the right move by Disney…

First opening in 2019, Star Wars: Rise of the Resistance is perhaps the hottest “ticket” in the entire of the Walt Disney World Resort. Usually, Guests would obtain a boarding group and be entered into a virtual queue system in order to ride the fan-favorite attraction. Now, with Disney’s recent announcement, anyone visiting the Florida theme park can enter a traditional standby queue in order to experience Rise of the Resistance.

It must be noted, that as of right now, this alteration is just for the Orlando Disney Park and not the ride at the Disneyland Resort.

We can see Disney’s original announcement, in part, here:

As we ramp up to “The World’s Most Magical Celebration” honoring our 50th anniversary, we’re continuing to enhance experiences thanks to the feedback from our guests.

We know our guests love choice and flexibility when planning their time in a theme park—which is why, starting Sept. 23, we will pause the use of virtual queue for Star Wars: Rise of the Resistance, and guests at Disney’s Hollywood Studios may experience this incredible attraction using a traditional standby queue for the first time since it opened in 2019.

For the full update, go here to read Inside The Magic’s full coverage.

Shortly after Disney Parks Blog released their news, Disney World fans were quick to weigh in on the new change, and it’s safe to say that the launch of the standby line is a rather polarizing update to Star Wars: Rise of the Resistance.

Well, today was the day that the Disney Resort debuted its latest attraction change, and it seems a lot of Guests were using their theme park ticket to rope drop Disney’s Hollywood Studios over the other Parks, Magic Kingdom, EPCOT, and Disney’s Animal Kingdom.

The crowds surged at the Disney theme park and we can see from the screenshot below (taken at 09:30 ET), that wait times rocketed to three hours just shortly after Park opening.

Now, Disney fans have weighed in on whether they believe it was the right decision for Disney to pause the virtual queue and use a traditional standby line, following the huge crowds and high wait times launch day.

Mark D. commented on Inside The Magic’s Facebook, saying:

Worst thing they could of done, just before the 50th anniversary. Bad play Disney!

Nope. No experience is worth a 3+ hour standby wait for a 15 minuteish experience. Waste of a good amount of day and admission to be honest.

Some Disney fans suggested that the debut of the standby line could be linked to Disney’s upcoming Disney Genie, and the paid FastPass+ replacement, Disney Genie+.

They’re just getting the crowds prepared for the launch of individual attraction purchases. You look at a 3 hour line and think hmmm…maybe I’ll just pay the $25 (or whatever it is) to skip the line.

It must be noted that as of yet Disney has not released the prices for the Individual Attraction Selection element of Disney Genie+. When this feature does launch, Guests can pay to use the Lightning Lane entrance to access the attraction while on their Disney vacation.

Matthew D. commented on the strain this update can cause for the rest of the Park:

No. The physical line is far too long. And I don’t just mean time-wise, I mean physically too long. Hollywood Studios is small enough we don’t need a line snaking out of Galaxy’s Edge and blocking walkways, restrooms, etc. Also with a virtual queue you could do other things than stand in the blazing Florida sun for 4 hours. I would rather take my chances with the virtual queue (which by the way I have never failed to get a boarding group for) than wait 4 hours in line.

However, some Guests are welcoming of the new addition to Rise of the Resistance. Louis S. said:

They always have reasons for making these decisions. I would believe part of the decision was people feeling angry about not being able to get a boarding group. It was very frustrating to have to run a second clock and keep refreshing, and all the tricks to get a boarding group. I’ll be curious to see how it plays out and what adjustments they make including going back to the virtual queue.

While the attraction did see high wait times around Park opening, the standby wait did seem to drop throughout the day. At the time of publishing the wait for Rise of the Resistance is currently 80 minutes, for example. It is always worth checking the Walt Disney World App — My Disney Experience — when planning your day at the Disney Resort.

Rise of the Resistance will also be available for Early Theme Park Entry!

Have you experienced the new standby line for Rise of the Resistance yet? Let us know in the comments!